« You Can’t Handle The Truth: Benefits of Weight Loss Will Motivate You to Hit Your Goals
A Nerdy Girl is Team Coco! » 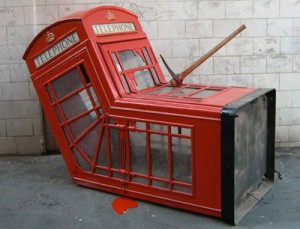 I don’t really have a picture to encompass my week, but maybe this’ll inspire me. Oh Banksy… .

The first week of NaNoWriMo is coming to a close and I find myself with only 3,914. The purpose of NaNoWriMo is to write 50,000 words in a month. It is a hefty goal, one that I found myself falling short of last year. The truth was, I had already written a story and wanted to just spend the month editing it and making it what it was supposed to be. That failed. Like, superfail. Flail your arms around like enraged kermit fail. Okay, enough of the past.

11/1 – This week started off fabulously, with 2950 words just seeping through my fingers on the first day. I was on vacation and sitting in a cafe with no outside interference *coughG4cough* I found myself incredibly inspired. I was floored by the things that came from my head. I knew they were there, sometimes it feels so incredibly difficult to articulate what you are thinking. It’s often like I need a babelfish just to translate what’s muddling around my brainpan.
Here’s a snippet of my favorite part of writing for day one.

“With each drink, the pain faded. Everything made less and less sense, but my inhibitions left me. I was intoxicated to the point that a part of me wondered if someone had slipped something into the countless drinks I was throwing back with reckless abandon.”

It’s not perfect, but I knew that if I worried about run on sentences, my meaning would never translate through my digits.

11/2 (Tuesday) – Uh… I didn’t actually write anything. After I had managed to get that burst of writing out on Monday, I headed to a friends house and did a mini tour de Connecticut (I even made a video of my big day out!) that got me back home at midnight, but left me utterly exhausted. I had a fun day hangover (no drinking occurred, so it wasn’t an actual hangover).

11/3 (Wednesday) – I managed to pound out 443 words during a lunch break. But, I returned to an office of chaos and I have to admit, after a 12 hour workday I had no intention of doing anything else but watch Morgan Webb, Kevin Perreira, Alison Haislip and Adam Sessler. Yep, back-to-back DVRed X-Play/AoTS was needed.

11/4 (Thursday) – Getting better! 944 words during an extended lunch break. I wasn’t going to stop until I had finished the scene. I have three primary characters, all seen through the eyes of the one being introduced into a deeper darker version of life than she was aware of. All three of them have been included in scenes, but I am about to get down to the job description of one of them and it totally gets me excited.

11/5 (Friday) – I knew I wasn’t going to get any work done on Friday because I made some weird decision early in the morning that I would remove the word “you” from my vocabulary and replace it with “Drew” in honor of my friend’s birthday… Drew have no idea how weird my whole day was. Follow that up with celebrations and I managed to slide in the door at 3am this morning.Oh that kooky Joel…

11/6 (Saturday) – Well it is now Saturday and I haven’t written anything yet, but I have an hour before I’m leaving for another birthday extravaganza. (Note, I actually posted this to my other site earlier and had apparently had an enormous spasm in my cranium and neglected to post it here. So here you are! Technically it is now Sunday on the East Coast and I haven’t written bupkiss.)

So, I haven’t hit the goal for the week. The goal is 10,002. I am at a paltry 3,914. I look at my writing buddies on NaNoWriMo and see Megan has almost hit her 50,000 words. It’s a bit intimidating, but I refuse to let it stop me. I should just be proud of her accomplishment (Not to forget all of my other writing buddies! Ya’ll are doing great! Keep going! Stop reading this and keep writing!)

One of the things I miss is that a friend and I no longer talk via email/facebook/IM during the work day so I stopped sending her stories. She always had the best reply whenever I sent her something.

The two most encouraging words for me to keep writing are “MORE PLEASE!”

This entry was posted by cranialspasm on November 6, 2010 at 10:02 pm, and is filed under Life. Follow any responses to this post through RSS 2.0.Both comments and pings are currently closed.