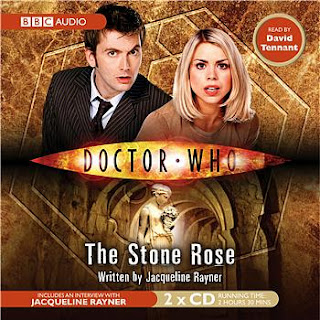 While I’m working on my next graphic novel review I decided to go ahead and review one of my favorite audio books. The Stone Rose was written by Jacqueline Rayner and read by David Tennant. It was the first original novel to feature the Tenth Doctor and was published in 2006. An abridged version of the book was released in 2006 The basic premise is that Mickey calls Rose & The Doctor back to present time England in order to show them something at the British Museum. While leading a group of children on a tour he discovered a 2000 year old statue of the goddess Fortuna that looks exactly like Rose. This, of course, leads Rose and The Doctor to ancient Rome to figure out what it’s all about and make sure that Rose models for this statue (in order to not screw with time and create a paradox and all that Timey Wimey stuff).

Of course, while in Rome (oh I hate writing that…brings back nightmares of that movie), The Doctor and Rose get into all sorts of shenanigans, that ultimately result in Rose being in mortal danger and the Doctor getting royally pissed off. I don’t want to share much more than that because it would ruin the book but suffice it to say the book is about two hours with of fun times with the Doctor and Rose (and read by sexy voiced David Tennant!) 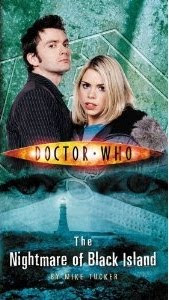 There are a ton of great Doctor Who audio books out there that I would recommend (my second favorite being The Nightmare of Black Island by Mike Tucker and read by Anthony Head…or Anthony Steward Head for those familiar with Buffy). However, this one is probably my favorite because not only do you get angry Doctor when Rose is in trouble but you also have guest appearances by Mickey and Jackie and a battle between the Doctor and tons of wild animals in the Colosseum (where he, of course, tries not to kill anyone).

Also, the book is full of great lines and the typical dry humor that is scattered throughout Doctor Who TV episodes. Finally, Jacqueline Rayner knows a thing or two about writing about the Doctor since she has been writing Doctor Who novels since the Eighth Doctor.

Now I’m going to sound like a commercial BUT if you are looking for a fun audio book to listen to during your workout or drive into work or whenever, I highly recommend checking out some of the Doctor Who audio books, in particular The Stone Rose and The Nightmare on Black Rock. There are also some good ones done with the Eleventh Doctor, including one actually read by Matt Smith (The Runaway Train), but there are far more based on the Tenth Doctor and quite a number of them are read by David Tennant. He does a great job with voicing the different characters and is overall really fun to listen to. And the stories are well-done and involve all the different companions (some of the Donna ones are hilarious).

Okay, done with my commercial pitch. Oh, and the books are a great way to kill time while waiting for the Christmas Special :). Okay, now I’m REALLY done.

This entry was posted by Stephanie Haley on October 4, 2010 at 11:04 am, and is filed under Books, Doctor Who, Fiction, Review. Follow any responses to this post through RSS 2.0.Both comments and pings are currently closed.