« Random Thought of the Day…!
The Serial Killer Experience (Part 2) »

My older brother first introduced me to comics as a kid, and from there my nerdiness grew at an exponential rate. Until one day, like a crack addict trolling back alleys looking for a high, I found myself desperately searching my local comic store for manga. Eventually I caught wise and just got my fix delivered right to my door, which had the added bonus of sparing me the frustration of dealing with the moron working at my comic store. If there is one universal truth in this world it is this: Manga is addictive. It is mind-blowingly awesome, and if you haven’t tried it yet, you need to, you know not what you are missing. In the hopes of persuading others to hop on my nerdy bandwagon, I give you the top 5 reasons why manga f*#@$ing rocks.

Japan is where reason and logic go to die, so of course, why would their graphic novels be any different? On a bat-shit insane scale of 1 to 10, most manga plots are about a 20. Yet somehow, because they come from such a crazy culture to begin with, I TOTALLY BUY IT! A boarding school where a secret class of vampires attends school with an unknowing bunch of humans, protected only by the two fifteen-year old school prefects? I’m sure it happens all the time in Tokyo!

Oddly enough, western culture crops up all the time in manga, often with hysterical results. 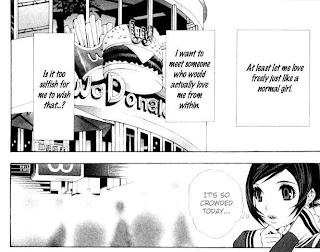 Thanks to the inter-webs, those of us too cheap to actually purchase volumes of manga can go online and find fan-scan sites. I would highly recommend these two:

For my money, the art found in manga is unparalleled. Hino Matsuri is probably my favorite. He has a style that is both exaggerated yet still realistic. He writes fantasy/romance-ish stories that have a way of staying with you after you finish a chapter. A friend of mine, and fellow manga freak, calls his work “sexy”. It’s not dirty or anything, but I think that’s probably the most apt description, it is sexy if not a touch melancholy. 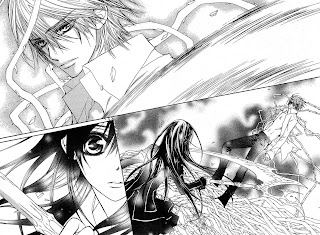 This entry was posted by flonz on October 6, 2010 at 4:45 pm, and is filed under Comics, Manga, Review. Follow any responses to this post through RSS 2.0.Both comments and pings are currently closed.