A Nerdy Girl and Her Anime Journey

So, some friends of mine told me that I needed to start watching ‘Bleach’. Now, I’ve never watched an anime show. I had seen ‘Ninja Scroll’ and ‘Final Fantasy VII:Advent Children’. These are the only two things I had seen that are considered anime. But to me, ‘FF VII’ doesn’t count towards anime – I look at that as a sequel to the video game. But I digress.
A few months ago, I decided to take the plunge. And 253 episodes in, I’m in love. ‘Bleach’ is about as awesome as they come. I don’t really look at it as anime. I mean, I know that it is because it’s animated and it comes from Japan, but to me it’s just an engrossing show. I care for all of the characters very deeply. It’s like I found something to replace the void that ‘LOST’ gave me when it finished in May. And that’s about the time when I began my journey into Kurosaki Ichigo’s life. 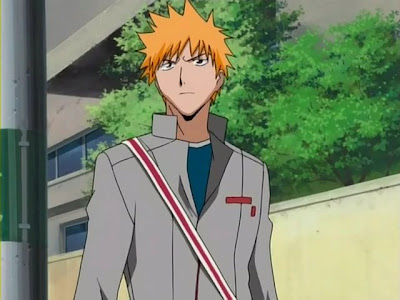 I began the show by watching it in its true form – Japanese actors with English subtitles. I know that they show ‘Bleach’ during ‘Anime Night’ on Cartoon Network, but I began my adventure at the beginning of the week, and ‘Anime Night’ occurs Saturdays at midnight. I wanted to start at the beginning, and I knew if I watched it on Cartoon Network, then I would not be able to do that. I’m sure I could have found it online somewhere, but it felt necessary to watch it in Japanese. Boy, am I glad that I did. The one time I attempted to watch the English dub, I lasted about 10 seconds before I lost it. To me, Ichigo’s Japanese voice is the epitome of sexiness. His English counterpart? A laughing stock. But, this is just my opinion folks.
Over the next few weeks, I’ll be taking you down a journey through each of the seasons. There are currently 14 seasons. I’ve made it through 13. Roughly each season is about 20+ episodes. There are some that are much longer than that, and there are some seasons that are much shorter. I hope you enjoy the journey as much as I have.

This entry was posted by kat b on October 6, 2010 at 9:28 pm, and is filed under Anime, Review. Follow any responses to this post through RSS 2.0.Both comments and pings are currently closed.