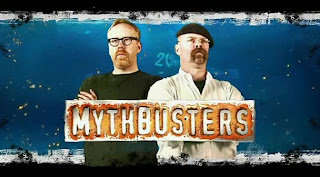 Ahhh, what better way to kick off October Wednesdays than with new Mythubusters? That’s right, there really is no other way. Forget the last hour of ‘Hell’s Kitchen’ with that adorable Gordon Ramsey, he can’t measure up to 5 of the coolest people with jobs that we all dream of. I am of course talking about Jaime Hyneman, Adam Savage, Kari Byron, Grant Imahara, and Tory Belleci.

So what were our mythbusting heros up to tonight? Dogs. This episode went to the dogs, again. Adam and Jamie went back to see if they could find new ways to try and fool the bloodhound into losing their scent, while they tried to escape from prison. Last time Adam tried spreading his scent everywhere, running through water, and spreading pepper to mask his scent, but none of it worked. This time though it was Jamie’s turn to try, and Adam was going to be hunting him down.

With a rousing, slightly edited, speech from ‘The Fugitive’ from Adam, Jamie was off! His first counter-measure? Red herring. Cans of it to be specific. He dumped a pile of fish in the middle of his trail then took off again, hoping that the scent of the fish would distract Morgan, the same bloodhound from the first attempt. It did, for a minute. Morgan had a nice snack before he was off again, although looking slightly confused. They passed by Jamie twice before Morgan finally picked up his scent in a tree.

Next on the list was for Jamie to don a ‘no-scent-suit.’ What is this you ask? Well he bathes, rinses and sprays, putting on different clothes that have any other kind of scent on it than his own. Did this work? No, not at all. Morgan found him rather easily. For his third attempt to stay out of the slammer Jamie decides to run through some water. Now anyone who remembers the original episode, from three years ago, knows that Adam attempted to lose the pup by running through water. But as our intrepid hosts tell us, the fans weren’t happy with the puddles that Adam was jumping through. This time Jamie was going to be running through a river.

Jamie set off, running through some rather deep and sucking mud. Seemed they’d be able to follow him without the dog. Then he went into the water, sometimes coming up to his waist, zig-zaging back and forth, crossing to one shore of the river and then back over to the other. Then he ran up and hid under some brush. It seemed like this might work, before testing it, as they thoguht that moving water would take the scent with it and make things harder. But good ole Morgan, he jumped right in and followed that trail! Even catching Jamie mid stream in the river. Adam’s thoughts?
“At first when I saw Jamie’s trail in the mud I was like, Hehn hehn hhen hehn. Then when I got to the river I was like, Awwwww. Then when Morgan found Jamie, I was like Woooooo!”

For those of you keeping track at home, the points do matter on this show, and the score isn’t looing good for our heroes. Morgan the blood hound – 3, Mythbusters – 0.

Next Sherrif Adam decided that it was time to find Jamie’s accomplice, cleverly disguised as so called volunteers. They had the five guys take the same path out into the field, only separating at the end to go to their designated trees. A path filled with five different scents? Surely this would work! Well, actually, it almost did. The first time it seemed that Morgan was confused, he went to the right person the first time, but he and his handler were getting mixed responses and they checked out the other four. So they repeated it with a different set of thugs, erm, volunteers. Once again, Morgan picked out the right person the first time, but had to double-check the others just to be sure. Can nothing stop this dog?

One last test to be certain. A test to the extreme. Jamie bathed in a tub with plastic laid out, then put on a special, fresh, white plastic suit. He then went to another tent where three experts were needed to complete a 15 step process that included a breathing mask, two other suits, and many many other different chemicals and washes to get off any Jamie smell that might be lingering. They then took ‘eau du Jamie’ and put it in a spray pack. Jamie took his head start and started to spray his scent all over the field, trying to confuse poor Morgan, then took of running, fairly confident that he was going to win this one. He was wrong. The blood hound barely paused at the discarded spray pack and found Jamie easily lying on the ground in a ditch, out of sight. It seems that the blood-hound cannot be fooled, and Jamie gets to go back to his jail cell that has missed him so.

Our other three sidekicks were testing their own ways to beat a different kind of dog. A sniffer dog, like the ones that go through your luggage at the airport, or the ones that police use to sniff out drugs. Five different dogs were brought in to sniff out “the contraband”, of which we the viewer were not allowed to know what is was, but were assured that it was legal. They tested their first dog by hiding the envelope above the wheels of a smelly horse trailer, surrounded by shipping crates and large trucks. There was no hesitation and they now knew what they were up against.

Here was their first plan of action.
Find something smellier than “the contraband” to hide it in. Where did they go? The Prop Co-op. over 30,000 pieces of props for just about everything in one building, and they all created a scent that ever our hosts could smell from the doorway. To make even more of a challenge they put “The contraband” into containers with five od the smelliest items; coffee, peanut butter, perfume, bleach, and citronella.

The coffee went behind some old phones, but the sniffer dog found it within five minutes time. The peanut butter went into a drawer of a filing cabinent, and that darn dog, well he found it even then. These dogs were good, they weren’t distracted by the fake scent leads that our hosts were leaving around the different aisles to cover up their dirty work. Even the bleach and perfume gave him no problems! But what about the citronella? Nah, he found it, not as easily, but confidently.

It was time to switch tactics. Bring in a crowd of over 200 people, a rather loud car stero thumping away, and a fast food taco truck. One person in the crowd would be holding the bag with “The contraband” in it. The first ‘average joe’ also carried a device that worked as a sound repellant for dogs. Every time the dog would come close to our hidden man he would press the button to try and drive the dog away. But it was no use, the dog was so well trained that it hardly deterred him from finding his goal!

Next was an age old tactic, confuse him with pleasure. A female dog in heat was brought in to stand next to our new offender, and this really seemed to throw the sniffer dog for a loop. That’s when the law stepped in and pointed out that in normal situations any dog would be removed, so she was removed, and it was no contest, the perp was caught.

Lastly, our sidekicks went for the luggage. Hiding “the contraband” under a false bottom, then filing it with clothes, and some stinky cheese, and salami, and other foods. The real test this time, though? To fool the handler. Maybe he would see the food and think that that was what his faithful sniffer had realyl smelled, and move on. They even went to a luggage store to make things harder. No go, Joe. The handler took everything out and went right for the false bottom. Next on the list? The most horrifying thing of all.

Hiding the contraband with some baby stuff, provided from the new mother herself, Kari. But that’s not the worst part. They pu “the contraband” in with a baf dirty diapers, wrapping it up in a week old, stinking, diaper. If I was the handler, I would have just burned the bag, “contraband” and all. But our faithful sniffer found the bag, and our brave handler wasted no time in digging the bag. His face told the story of the smell and his want to go searching, but there was no hesitation when he pulled out the dirty diaper.

The moral of our story tonight, boys and girls? Don’t do anything illegal, or try to break out from prison, for man’s best friend will also be man’s worst enemy. Also, they’ll send out the dogs if you try any of their stunts and experiments at home.

Some people give the Mythbusters some flack for not being truly scientific, for not running enough control tests, for not running enough variable tests, which often leads to re-visits of myths. But I say, ‘Who cares!’ THey put in the time, and the math, so the rest of us don’t have to. If they did everything like the others in white coats in pristine labs, the show would not be as entertaining. And who doesn’t like to see Adam wearing costumes and trying to win one over on Jamie? I know I do.

Next week, the Mythbusters meet up with the Storm Chasers to test out some tornado myths, that include jet engines. Who’s up for that?! Me, me, me!

This entry was posted by Megara Noelle on October 7, 2010 at 6:01 am, and is filed under Nerd Food, Review, TV. Follow any responses to this post through RSS 2.0.Both comments and pings are currently closed.