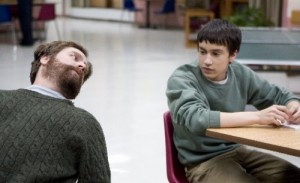 Craig (Keir Gilchrist) wakes one Sunday morning with the strong desire to take his own life. Instead, he hops on his bike and navigates through the streets of New York to get to the nearest hospital. He is admitted to 3 North, the adult lockdown wing and suddenly feels that his problems aren’t so bad.

He tries to leave but is notified that there is a five day minimum for psych evals and he has been admitted at the behest of a doctor (Aasif Mandvi). Unhappy with the situation, he decides to make the best of it. He takes the time to reflect on his depression and figure out how to bring some happiness into his life.

During his stay he is taken under the wing of Bobby (Zach Galifinakis), a fellow patient who is anxious about being accepted into a group home after the end of his allowed time on the psych wing. Craig meets Noelle (Emma Roberts), a fellow teen who is struggling with depression.

The movie takes place more in Craig’s head than in reality. It was tragically beautiful. Scenarios ran through his head that were so fanciful, when something outrageous was happening, I was unsure if it was something conjured up in his head. There was, however, this one sequence where Craig is introduced to his artistic side and you are taken through an illustration.

This entry was posted by cranialspasm on October 8, 2010 at 5:42 pm, and is filed under Movies, Review. Follow any responses to this post through RSS 2.0.Both comments and pings are currently closed.