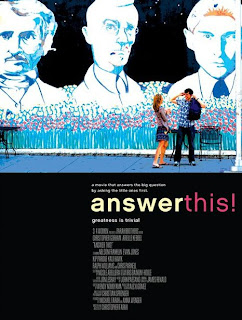 I was fortunate enough to get tickets to a screening of Christopher Gorham’s new film “Answer This” last Friday at the Michigan Theater in beautiful downtown Ann Arbor, and thought I would give you guys a sneak peak!

Written/Directed/Produced by Ann Arbor natives the Farrah Brothers–Mike, John, and Chris–“Answer This!” tells a story about a stalled Michigan University academic named Paul (Gorham). After many years of pursing a Phd. in English Lit, Paul is faced with the impending doom that is graduation. Paul’s father, Dr. Elliot Tarson–played by real-life beloved U-M retired English Lit Prof. Ralph Williams–is retiring, which means no more “free ride” for Paul. This sends Paul into a downward spiral, where he discovers the competitive world of Pub Trivia and freshman Naomi–played by Arielle Kebbel.

Like any father, Dr. Tarson has always wanted the best for his son, and using the power that he has garnered over the years working at U-M–he has created a sort of “academic paradise” for Paul. His creation of the easiest path possible for Paul to follow in his footsteps and eventually become his successor at the University means that Paul has never really faced any kind of academic hardship. He’s always succeeded in all things at U-M because of who his father is–like becoming a TA for Dr. Tarson despite not meeting the GPA requirement, and also being excepted into U-M’s Graduate Program.

But the ride is about to end when Paul learns that his father is going to retire after the school year ends–which means it’s time for Paul to finish his doctorate thesis, grow up a little, and use the tools and advantages that his father has given him to make a life of his own….just so long as that life is one of Dr. Tarson II, renowned English Lit Prof. at U-M.

You can kind of guess where the plot goes from there. Paul has loved the game of Trivial Pursuit since he was very young. He and his friend, James (Nelson Franklin) gather regularly and play against one another with Paul’s edition of the game that he has had since he was six. After learning of his father’s retirement, Paul meets James at their local pub, they get drunk, enter into a trivia contest, hilarity ensues. He uses training for the championship and the cute co-ed Naomi (Kebbel)–who is one of his students, and who he meets for the first time when she asks him for directions to Dr. Tarson’s class–as distractions for what Paul feels is his inevitable failure at living up to his father’s standards, and filling Dr. Tarson’s gigantic shoes. 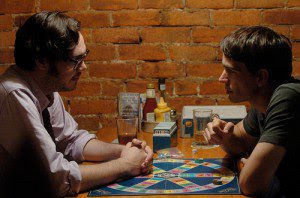 What struck me first about this movie was not the sometimes predictable, but heartwarming, hilarious plot–rather, this is a movie about Ann Arbor, that was filmed in Ann Arbor, that uses many locals from Ann Arbor, that MAY not be appealing if you don’t live/know anything about Ann Arbor. For instance, most of the cheering from the audience happened NOT when Chris & Arielle stood up and said “Go BLUE!” before the film (There was a game the following Saturday against bitter rivals Michigan State–FYI, MSU WON—GO GREEN!) but instead when Ralph Williams came on stage and gave a few words before the film began or when some of the well-known locales were shown through out the movie–the cube, Nickels Arcade, Ashley’s, the Rackham Building, U-M’s graduate library, the Ingalls Mall fountain, etc.

I like this movie–after a hard couple of years, Michigan needs this. We need to get the message out that we’re a great place to shoot films, etc., but I’m afraid it won’t be as welcomed when it hits the festival circuit as it was in Ann Arbor.

My favorite character–and the person who saved this movie for me–is ICE, played by Evan Jones. Without giving too much away, Ice enters the story after Paul and James realize that they know NOTHING about sports. So Paul suggests they contact his Friend Izzy “Ice” Dasselway because he was the best kickball player in the forth grade, and was the biggest jock in Paul’s class. So–he should know a lot about all things sports related……..right?

Overall–I give this movie 3 out of 5 stars. Some of the dialog is cheesy, and the plot is nothing new, but I think/hope if you grew up in a “University” town–or any small town for that matter–you’ll get this movie. You can substitute your favorite teacher in High School for Ralph Williams, and Ann Arbor for your favorite town–and I think that’s part of the charm of “Answer This!”.

This entry was posted by Sparkles Fantastic on October 11, 2010 at 6:00 am, and is filed under Movies, Review. Follow any responses to this post through RSS 2.0.Both comments and pings are currently closed.