« The Nerdy Casual Gamer
The Birth of a Hashtag, a Nickname and a Movement » 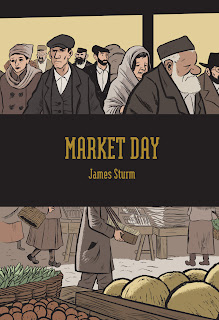 Last Thursday, October 7, I went back to Meltdown Comics in order to get my next recommendation.  This time I was assisted by Jim Higgins, an independent comic book writer, publisher, and editor.  He teaches classes for Meltdown University, a weekly workshop that teaches the basics on being a comic book writer and/or artist.  I fully intend to return and sit in on a couple of classes at the very least so that I can write up a review for you lovely people.  In the meantime, I get to share my review on the book that Jim recommended, Market Day, by James Sturm.

Market Day is a short, simple-and-yet-beautiful comic/graphic novel that takes place in early-1900s Eastern Europe (right before the Industrial Revolution).  It tells the story of a day in the life of Mendleman, an artisan with a growing family (first child on the way) that has made his living selling handmade rugs to the market in town for most of his life.  This day, however, Mendleman finds that the market is not what it was and, instead of paying money for finely crafted home-made items, it now sells mass-produced, cheaply made merchandise.

Yes, this story is a metaphor. I don’t think I need to elaborate too much in order to demonstrate the similarities between the times.  Nevertheless, the beauty of the book is not just that it we can recognize the metaphor.  Market Day reminds us that the current moment of economic and social upheaval in the early 21st century has happened before and will happen again, and that we will continue to survive. (That’s right, a graphic novel about the early 1900s has the same message as a TV series from the Syfy network about cylons).

When I started reading the book I was afraid that the symbolism would be heavy-handed.  Instead, it was quite the opposite.  It is really a basic story of a man who finds that his craft is no longer desired and must find a new way to support his family.  That is it.  One day, one major life-altering realization.  Instead of being a heavy-handed “lesson” about the evils of modern society, it is a tragically beautiful story about Mendleman and his coming to grips with a reality where he must do what is best for his family, not necessarily what is the most pleasing to him.

Since the entire book is told from Mendleman’s perspective it stays relatively focused on his immediate thoughts and concerns.  We watch as he enters the market and he describes the things he loves about the market, the children playing, the smell of the food.  Then, as he finds out his handiwork is no longer desired, we see how his perspective on the exact same market has altered to now focus on the starving dogs and cruel merchants.  This change in perspective does not feel forced, but rather goes naturally with the progression of the story. 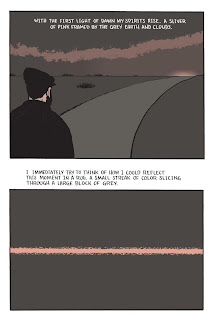 The art is gorgeous. The pictures tell more of a story than the actual words most of the time.  In fact, it is not until page six of the book that we get the first bit of “dialogue.” Throughout the book there are moments where we will go through multiple pages without any words.  I can’t really think of a complaint against this even though I am typically a big fan of dialogue/prose.  I think the reason it works so well with these types of graphic novels is that it forces you to slow down. When there are no words on a page I find myself spending more time looking at the entire image multiple times.  Take in the whole scene. We aren’t being told what is important in the image and therefore we have to figure that out ourselves.

Even when there is prose on the page, Sturm oftentimes provides simple, bare frames throughout the book.  Once again, this allowed me to sit back and take in the whole page and determine its significance on my own, whether it was the shear distance of the market from Mendleman’s home or the process by which Mendleman creates a work of art in his mind from his everyday surroundings.

I’m excited that Jim Higgins introduced me to James Sturm’s work.  I was already familiar with Art Spiegelman, Marjane Satrapi, and Alison Bechdel, but I don’t know a lot of the more recent independent comic book writers/artists.  I am and always will be a superhero/noir/action comic book girl, but I also really love independent novels.   They force me to slow down and really appreciate the comic book medium for what it is, a unique interplay between prose/dialogue and images that can be experimented with in an infinite amount of ways.

This entry was posted by Stephanie Haley on October 11, 2010 at 11:34 pm, and is filed under Comics, Review. Follow any responses to this post through RSS 2.0.Both comments and pings are currently closed.