#5: Walking the Room
(I’m sure that Greg and Dave will probably complain that they are #5 out of the five mini reviews I’ve written, but to give them a bit of perspective, I listen to about thirty podcasts so the fact that I’m taking the time to write, this is a word hug to my cuddlahs.)

Walking the Room is one of the most vulgar and violent verbage out there when it comes to podcasts and I love every fucking minute of it. Greg Behrendt and Dave Anthony don’t veer from letting the F-bomb fly and their mock animosity for each other is HYSTERICAL! They like to play “Here’s What I’ll Do” followed by a lengthy description of the unconventional death of the other. At one point one of them talks about going out, buying a pair of Doc Martens, and then kicking the other in the face. I think it was Dave. I laughed so hard, on the pee scale, I would give it a four out of five drops.

In one episode, Greg and Dave lament the death of the “guy’s guy”. They go on an extreme tangent about the search for the next “Steve McQueen”. If they remade Bullitt right fucking now I would punch someone in the gullet. It’s true. With the amount of rehashing of old plots, I would be hard pressed to find new blood to play John McClane in a bastardization of Die Hard.

Their podcast is incredibly random. They end up ranting about various things but there is always one constant. They love candy. Super love candy. If candy was a dude they would light some candles and cue the Brokeback Mountain soundtrack.

Walking the Room is like being spanked, but with humor. Sometimes it hurts. Sometimes you tear up a bit. But there’s always something that brings you back to it.

And I almost forgot!

I’m a “Cuddlah” FO LIFE!. Clown from the neck down.
Oh and I’m terrified of clowns, but just the makeup. Everything else is okay, so this picture is sublime. 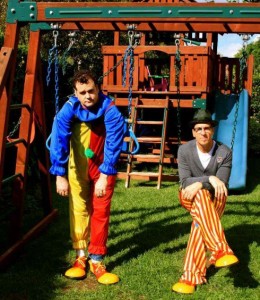 Clown From the Neck Down

This entry was posted by cranialspasm on January 12, 2011 at 9:00 am, and is filed under Live Comedy, Podcasts, Review. Follow any responses to this post through RSS 2.0.Both comments and pings are currently closed.