« We Are All Lost: Teaser Trailer
Introduction from the New Kid »

Podcasts That Got Me Through 2010: #4 Doug Loves Movies

#4 Doug Loves Movies:
Doug Benson has to be the most productive stoner in the world. It’s amazing how much he ends up doing. In addition to his stand up, his BENSON INTERRUPTION theater extravaganzas and his fresh new viewing of the BENSON INTERRUPTION on Comedy Central, Doug has time to tell everyone that will listen how much he LOVES movies. His podcast originally started out as “I LOve Movies” but this year he changed to “Doug Loves Movies”. You will find many movies online at https://freecouchtuner.com/genres which are easily available to watch.

In each episode he has a panel of people that talk about their love of movies or their complete lack of movie knowledge. The panelists are introduced and he’ll ask a few questions before they start playing games. They pick out people from the live audience to play for and the winner gets a bunch of stuff that all of the participants bring in. 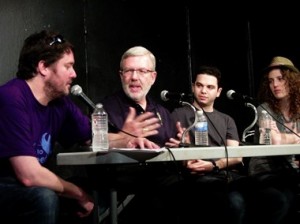 There is a reason why it is in my top five podcasts.

This entry was posted by cranialspasm on January 11, 2011 at 9:00 am, and is filed under Humor, Podcasts, Review. Follow any responses to this post through RSS 2.0.Both comments and pings are currently closed.