HOW ADORABLE IS THIS?

#3 Pod F Tompkast:
The Pod F Tompkast came out later in the year, but I found myself drawn to it like a hobo to a five galloon drum of fire. Paul F Tompkins is easily one of my favorite comedians and with his guest spots on Comedy Death Ray and regular appearances on other podcasts I listen to, when he announced that he was starting a podcast… I knew I had to give it a listen.

The best part of the Pod F Tompkast is that it’s bringing something often overlooked in the podcast ‘verse – a script.

In highschool, my favorite recordings to listen to were those of Firesign Theatre. The plights of Nick Danger, the episodes of “Beat the Reaper”… They were amazing. The idea that someone could make you laugh like a bastard just by tickling your ears was as foreign to me then as it is to the younger generations now. Now, we are bombarded by every sense. If there was smellovision, tasteovision and tactilevision we would be overusing them to the point that we wouldn’t leave our homes. But that all requires your complete attention.

Listening to Pod F Tompkast has brought me back to a simpler time that is much more complex than the youtube vloggers of today (has your brain exploded yet?). He tickles your earholes with his delightful tales of the partnership of people such as Ice T, the Cake Boss, and Dame Sir Andrew Lloyd Weber(everytime he says that I laugh so hard I die a little inside). This ten to fifteen minute interlude inspires the imagination and I laugh at the absurdity of it all. The backstory of cake boss’s soothsaying powers originated from Paul’s visits to Comedy Death Ray Radio, but they have evolved into so much more.

The next segment is a clip from one of his live shows. The first episode included a clip of him reading google transcriptions of his voicemails. I had to listen to it four times because I was laughing so hard.

The final segment is a conversation between himself and Jen Kirkman. They talk about how they met and occasionally Jen will share stories from her life. It is incredibly entertaining. It’s almost as if you’re sitting in a Starbucks and eavedropping on the FUNNIEST FUCKING CONVERSATION OF YOUR LIFE. 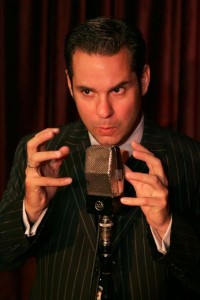 A slight sidenote – Paul F Tompkins has this really great idea that originated out of sarcasm. He had tweeted about being at a specific location and someone had asked him if he would come somewhere else. He told the person requesting it to have 300 people commit to seeing him and he would go out there. Thus the Tompkins 300 came into existence. I recently joined the facebook page for New Haven CT and if you are in the area and love comedy you should join. BUT! Do NOT join if you are not in the area. It doesn’t help anyone in the group if you do. We’d like Paul to come to New Haven, but not if there won’t be a bunch of people there to appreciate him.

This entry was posted by cranialspasm on January 10, 2011 at 9:00 am, and is filed under Humor, Podcasts, Review. Follow any responses to this post through RSS 2.0.Both comments and pings are currently closed.