Podcasts That Got Me Through 2010: #2 Comedy Death Ray 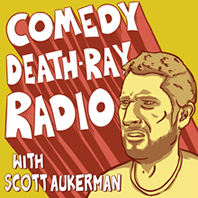 Scott Aukerman hosts this weekly radio program with a guest co-host. Through the hour characters take advantage of the Earwolf “open door” policy by coming in and hopping on the radio. From El Chupacabra to Little Gary, you would be amazed at the comedic starpower that hops in. Many comedians come in as characters they have created or overexaggerations of celebrities (such as Paul F Tompkins as Ice T – In one episode he tells someone to eat a bowl of dicks. I don’t remember which one, so listen to them all.) Seth Morris as “Bob Ducca” makes me laugh so freaking hard. Especially when he lists all of his ailments. I know that Parallel Parkinson’s Disease isn’t funny, but… but… it is. Also, I want to lick Nick Kroll. That has everything and nothing to do with Comedy Death Ray, but I just figured I’d make that known to the internets.

Scott also plays games with the guests like “Would You Rather” or “Fortunately/Unfortunately” where the guests imaginations are taken to beyond their limits. There is a request for would you rather scenarios on TWitter and then Scott takes over from there. The guests are welcome to ask questions to help them choose the correct answer. If you are going to go straight to one of those games, might I suggest Episode #63 with Jon Hamm, Rich Sommer, and David Koechner as Jon Hamm mentions Bat for Lashes and I’m completely on board with that.

Subscribing to Comedy Death Ray will be your smartest move for 2011… AND IT’S FREE!!!!!

This entry was posted by cranialspasm on January 8, 2011 at 11:00 am, and is filed under Humor, Podcasts, Review. Follow any responses to this post through RSS 2.0.Both comments and pings are currently closed.