Many of you may or may not have heard about the “controversy” regarding the music video Geek and Gamer Girls. This parody video of Katy Perry’s California Girls has sparked a familiar debate regarding the objectification of geek girls and the failure to represent geek girls of differing shapes and sizes. You can read a little about this debate at Edgar of all Trades’ blog.

As a geek/nerdy girl that has spent quite some time studying feminist theory in undergrad and grad school I think this problem is too complicated to simply have a black or white answer. To put it simply, women are objectified regardless of their interests. A lot of people argue that we do it to ourselves, while others argue that we have no choice but to behave/dress the way we do if we want to be recognized in both social and work environments because this is how society tells us to dress/act/etc. Both responses are too simplified and I personally struggle with my own opinion on this issue frequently in my day-to-day life.

I don’t want to generalize about all women so I will speak for myself. I am a woman that has something of an hourglass figure. I don’t necessarily look like the typical stereotype of geek girls that are supposedly frumpy and don’t care about their appearance. I like to dress up, I don’t wear a ton of make-up but I do wear it daily, and I love to get my hair done. On the other hand, I definitely do not look like the girls in that music video. I don’t work out nearly enough in order to have those bodies and I’m okay with that. Because of my middle ground, a lot of people do not immediately expect me to be a massive fangirl/geek, but I am. Until I started to let my freak flag fly more, most of my friends would have never pegged me as the kind of girl that would sit in my apartment all night playing an ARG or that would spend money on Doctor Who & Death (from the Sandman) posters or Serenity action figures. I don’t “look” like a nerd but I am a complete and unapologetic fangirl/geek/nerd, whatever you want to call it.

I think the problem with this discussion is that we expect nerd girls to be treated differently than most other women. There are tons of women out there that do not have ideal bodies or look like the girls in that music video. They also don’t get the proper attention from the media that they deserve either. I’m not saying that is okay. Far from it. However, the song California Girls that these geek girls are parodying? Not completely accurate about all CA girls. I can tell you one thing, I definitely do not wear Daisy Dukes or a bikini while I walk around the beach. Unfortunately, though, that is what sells in the media for the most part. Those images are used to objectify lots of women. I think we’ve made some progress lately, what with the Dove ads and shows like “Huge.” Nevertheless, there is still a long way to go and this counts for all women, not just nerds. I think for us to argue that we need to represent all nerd girls of all different shapes and sizes is a valid argument but unlikely to happen until all media recognizes women of different shapes, sizes, and race.

Unfortunately, women are objectified regardless of their “category.” I feel that making a particularly huge fuss over this particular music video means that we expect geek girls to get different attention than other normal women that don’t look like these models but also aren’t geeks. This does not mean that I am happy with the fact that the Booth Babes at Comic Con do not even remotely strike me as nerds nor that I’m happy with the fact that a model gets to help sell TV shows or comics that I love just because they look like what society deems as “sexy.” I’m not and I am super pissed that I can’t volunteer at booths because I’m not the “ideal.” However, as Jackie states below, we can’t say with certainty that none of these women are nerds and it is not fair to condemn them all based on this generalization because then we really aren’t any better than them (I know, cliched response but it’s true). It just means that I don’t think we need to jump down the throats of fellow geeks that want to make a parody video just because they all happen to look like what society deems as “ideal beauty.” I’m not saying I love this video. It’s a parody but other than their costumes there isn’t much for me to be geeked out over in the video. Nevertheless, let’s work on making women less objectified in all genres and media texts, not just in our own little nerd haven. 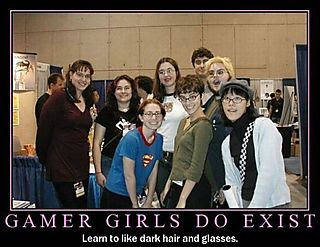 These seem like two different subjects to debate here: the objectification of women, in general; and the glorification of nerd culture, using the “beautiful” people to portray iconoclastic characters and ideas rather than those who actually love and appreciate those things.

When it comes to objectifying women, it’s simply always going to happen. It’s ingrained in humans to mate and reproduce, and continue our species.. so naturally, looking at potential mates that are appealing to the eye is a common practice. This goes for both sides, but is far more seen as demeaning to women. Of course, there are those who are offended by this, and those who find it empowering in a sense. As Stephanie mentioned, this is not a black and white situation.

Now.. the more pressing, and directly related topic here is how nerdom is being cashed in on as it’s brought into pop culture. The common booth babe is drop-dead gorgeous, but has no basis for the Kirk vs Picard debate. They’re there to sell you merch. This is okay to a lot of drooling nerds, but what it comes down to is what’s more appealing to you: silicon breasts, or an interesting, engaging conversation. This goes for women, too. For me, personally, the tipping point in the decision to date my last boyfriend was that he was more than okay with watching old Batman cartoons with me on a lazy Saturday morning. It’s a huge generalization to say that all booth babes are completely uninterested in actual nerd culture, but the general consensus is that they’re nothing more than a pretty face.

Bringing these two subjects back together, with regards to the video in question: my issue here is that they show more bare bodies covered with console controls than they do comics and gameplay. The music, not only was not very good at all, and not original. It seems to me that we, as geek girls, could do better. More power to them for embracing their nerd roots, but relying on ‘sex sells’ to push the video (even choosing that particular Katy Perry song to parody adds to this) is a little lower than our standards should be. 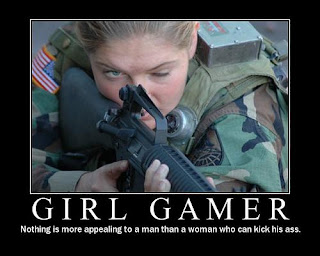 The main reason we did this post in this format is because we really want this to become an open, friendly discussion on this issue and other issues about nerd/geek girls. Please comment and be respectful of different opinions 🙂

This entry was posted by Stephanie Haley on September 13, 2010 at 2:07 pm, and is filed under culture, gaming, gender issues, popular culture. Follow any responses to this post through RSS 2.0.Both comments and pings are currently closed.