Best Buy. At the door, I’m greeted by an ODST Helljumper. Next to him, a soldier of the retail variety, clad in blue and khaki armour (pretty crappy armour, actually). He hands me a grey beanie, a blow up Energy Sword, and motions me in. Gathered around TVs, a group of us eagerly await 0:01. White and black controllers gripped by the hands of Halo fans, blasting round after round of pistol and Assault Rifle into the others’ faces. All laughing, some sort of caffeinated beverage in hand, discussing their experiences with the other games. This, was a small group of the Halo Nation. This was what Halo can do. Bring a group of diverse people together (well, all geeks), and have them be able to smile and reminisce.

My hands sweat a little as I stand on line, pre-order slip in hand, ID in the other (it’s Best Buy pick-up policy). I am first to check out. Rocking the Noble Team beanie, I hoist my Legendary Edition (shut-up) in the air as the others tell me to enjoy and clap. Likewise peoples.

This was it. The unboxing, like foreplay, slowly undressing piece by piece until you get to the core and bask in the majesty. Then just lay they afterwards, smiling, glowing. 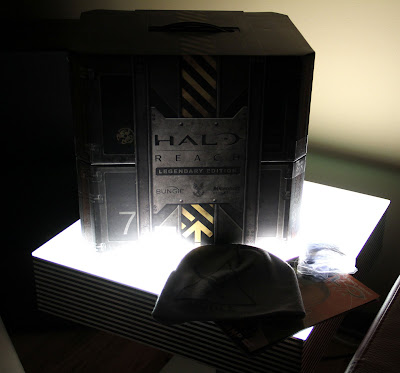 Since the release Halo: Combat Evolved, I’ve been a huge fan. Because of the epic story, the badassity of the Master Chief, the co-op, multiplayer LAN parties through system link, Halo was this game that surpassed the game. It became a universe, through the various books (which I read, thank you very much), comics, etc. But also through the various people who bonded over it. It was this amorphous mass, much like the Gravemind, that grew and took gaming from this “in the basement, nerd” thing to a mainstream audience. And it helped Microsoft compete with their newly released X-Box.

So when I dropped almost $150 on what to many of my friends was a huge cardboard box, albeit awesomely designed, it was worth it. This was the last of Bungie’s installments. It was their swan song to all of the millions of players. To me, Halo was part of my life for almost a decade. This was worth it.

Part 2 Coming Later Today or Tomorrow! Full of review, who the hell I am, and other awesome saucery! 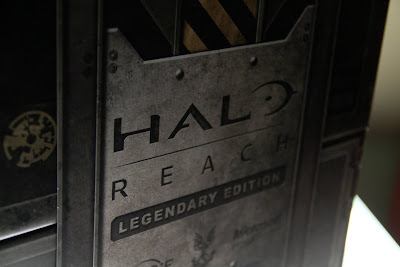 This entry was posted by QwerkySIntax on September 15, 2010 at 12:56 pm, and is filed under games, geek, Review. Follow any responses to this post through RSS 2.0.Both comments and pings are currently closed.