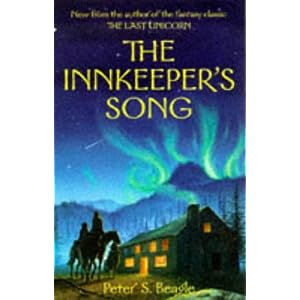 This book was a personal favorite of mine as a young, Fantasy-obsessed geeklet and recently I revisited it. I was not disappointed! Many of you nerd-babes may know Peter Beagle from his stunning Last Unicorn, but this lesser-known book is a Fantasy masterpiece.

I know, I know—them’s strong words, particularly coming from a geek who reads LOTR almost yearly. There are many reasons for my statement, but the main two elements of literature that make this the best Fantasy I’ve (re) read in a long time are: character (and POV), and the way the Fantasy world (and its magic) is built.

The book uses a short-chapter construction, with each chapter titled with the POV character’s name. What this does is makes the intense emotional journeys and tense action sequences easier to bear. If the entire novel were told from the perspective of, say, Lal (or Nyateneri or good lord Tikat), the reader would be exhausted emotionally and wouldn’t be able to take the huge dramatic builds in each action scene. By chopping the action up into small (yet tautly constructed) chunks, each from a different character’s perspective, we get a kaleidoscopic view of the story, and insights beyond what we’d get with 3rd-person limited POV. This structure also gives us a clearer view of each character (we get their inner life as well as other characters’ opinions/observations of them), without getting lost in info dumps. The lack of info dumps/exposition doesn’t lose a reader—actually, it makes the characters that much more realistic, and puts the reader there in the world with them.

The other thing that’s so gripping about the way these characters reveal themselves to the reader (and is actually the same reason why I found Rothfuss’ Name of the Wind so great—hey, I wonder if he was inspired by this book?), is that each character is telling the story right to the reader, as though s/he is in an inn, listening over red ale. The characters refer to the fact that they’re recounting what happened, years later, and even go so far as to address the reader directly: a couple characters ask “do you understand what I mean?” and stop the reader from interrupting them. One character even threatens to dunk the reader’s head in their soup if they continue laughing at them. This tone makes the story compelling in that it sounds like real people talking. It makes you want to know what happens next that much more.

This is, of course, why the world of The Innkeeper’s Song is so complete: the characters explain what happened, but as though the reader is also a tenant of the world, has heard the legends before, and is merely there to relay their eyewitness account. Far from confusing the reader, or not having enough background detail to easily picture the world, two things are happening with this multiple-realistic-POV technique: 1) we get certain events reiterated without seeming repetitive, and 2) the people and surroundings are so realistic that even the magic and foreign-sounding terms are readily understandable, because there is so much context.

Any of you multilingual nerds will know that long before one becomes fluent in a different language, one can understand it pretty well by gist, and context. Sure, there are creatures that aren’t from Earth, but a reader can readily get what (for example) a rock-targ is, or a shikri, from not only the sound of the names, but all the characters’ reactions to/knowledge of them. This is the way a Fantasy novel should be—it should plunge you into the world without using the dreaded info dump, but not in such a “Viking swimming lesson” way as to confuse or lose the reader. This is a fine line to tread, and Beagle is a master at it.

It’s my theory also that the main reason that the magic is so realistic (!) in this book is that the two magic-users in the story aren’t ever a chapter-heading. In other words, we are never in either of the wizards’ heads, never in their POV, but only observing the magic from outside the magic-user. This way, the actual process of it is a mystery, and the one who actually practices it are sort of like an old-school ninja-movie sensei, like Mr. Miyagi, who is simultaneously the master of life’s secrets, and also kind of a kook. The other is the classic over-egotistical, disgruntled, powerful “sith apprentice”. So we have the perspective of students, learning about what they do but rightly not understanding completely. This is a way to get lots of information across about the fantasy world, without becoming Basil Exposition.

Also, there is one point in the story at which I always, but always, have to reach for a tissue. Even when I know it’s coming.

I also hear that Beagle has written/is writing a sequel, or at least will be visiting the world (hopefully the characters?) in the future.

I highly recommend The Innkeeper’s Song, especially for those of you that get sick of uber-noble Aragorn types and would enjoy a Fantasy in which someone uses the word “goatfucking.”  J

This entry was posted by Prof. Jenn on December 5, 2011 at 11:00 am, and is filed under Books, Fiction, Review. Follow any responses to this post through RSS 2.0.Both comments and pings are currently closed.