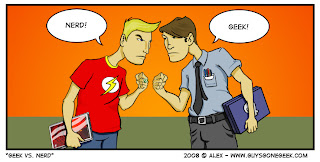 I was having a conversation with a fellow female Geek/Nerd girl this afternoon about labels. This conversation was sparked by our discussion of the Geek and Gamer Girls Video (because I think she is one of only 2 other geek girls in the world that hasn’t seen the video yet!) The video is actually not the point of this blog entry, however. Instead, I want everyone out there (girl or boy) to think about what was the first term you used to define yourself as a geek/nerd/dweeb/fangirl or boy/etc. Why was that the term you used? Did you read it somewhere and assign yourself that term? Or did you hear someone else call you that and just assume that is who you “are?”

Basically, my friend told me that she has never viewed herself as a nerd. Instead, she always assumed the word nerd was a word of derision assigned to her by others while geek was a term of empowerment that she gave herself. I realized that I had never given much thought to the difference between the words. I cannot remember when I started referring to myself as a nerd but I can’t remember a time when I referred to myself as anything other than a nerd.

Before I start with our vocab lesson, I want to give my “qualifications” for being a nerdy/geek girl. I have read comics since I was in middle school (starting with the X-Men and moving up into Sandman, GN territory in college). I am a TV and movie fanatic/scholar (went to grad school in order to study TV…I know, right?). My dream job is to work in the comic book industry but for now I work as a sound engineer/designer. My room is covered with nerd posters, including Doctor Who, BSG, Death from the Sandman, and Supernatural (b/c even true nerds/geeks can have guilty pleasures). I am fascinated with mythology and biology. I love to read more than I love watching sports (although I am a Hockey fanatic). If I could, I would go back to school to learn programming b/c it just seems kind of sexy to me. Oh, and my new goal? To become a true gamer. Right now I’m too poor for it but someday I will be able to afford a console again. For now I settle for ARGs. Anyway, enough about me.

1. a stupid, irritating, ineffectual, or unattractive person.
2. an intelligent but single-minded person obsessed with a nonsocial hobby or pursuit: a computer nerd.

Geek is defined somewhat similarly but with a key difference (besides the circus performer that bites heads of chickens, that is):

1. a computer expert or enthusiast (a term of pride as self-reference, but often considered offensive when used by outsiders.)
2. a peculiar or otherwise dislikable person, esp. one who is perceived to be overly intellectual.
3. a carnival performer who performs sensationally morbid or disgusting acts, as biting off the head of a live chicken.

Clearly, dictionary.com does not define either words in entirely positive terms but at least “geek” gets the privilege of being acknowledged as positive when used self-referentially.

Of course, Urban Dictionary.com has tons of definitions for both but the #1 definition for nerd (One whose IQ exceeds his weight) is much more negative than the #1 geek definition (The people you pick on in high school and wind up working for as an adult).

What’s the point of this lesson? Well, since most of you out there probably knew these definitions already, I’m guessing there is not a ton of enlightenment going on here as to what the words mean according to society. But it threw me for a loop. I mean, I’ve always labeled myself as a nerd and I’ve been proud of it. I’ve never thought that the nerd was a derivative label given to me by others. However, when I look around at other nerd/geek blogs, I see that most people elect to use the word “geek” instead of nerd. Why? I mean, obviously there is nothing wrong with either term if that’s how you want to identify yourself. I definitely don’t think my IQ is larger than my weight and I am not single-minded, unattractive, stupid, or irritating (awkward, yes, irritating, no). I have lots of friends both online and IRL and I have a BA from University of Michigan and an MA from University of Spoiled Children (I mean, Southern California….look! I have a sense of humor too!) So, if I don’t think nerd is a derisive term, is it?

There is no right or wrong answer to this debate, clearly. I am just curious I guess. What term do you use? DO you use one of these terms or do you use a different one all together? Is it wrong that I refer to myself as a nerd? Or does it make me less “single-minded” because I’m appropriating the term nerd from those who want to say it means one thing in particular when in reality we can make it mean whatever we want it to mean.

PS – I think this is a good metaphor for the Geek & Gamer Girl video too…but, you know, to each his/her own 🙂

This entry was posted by Stephanie Haley on September 17, 2010 at 11:04 pm, and is filed under culture, Fandom, geek, Life. Follow any responses to this post through RSS 2.0.Both comments and pings are currently closed.