« Ask the Nerds: How to Date a Non-Nerd
Book Review: Jackrabbit »

It’s the fight we’ve all been waiting for. Even though a few years ago we didn’t even know we wanted it.

Reactions to the new Sailor Moon series have varied wildly, ranging from excited to horrified after Pretty Guardian Sailor Moon Crystal began airing worldwide on July 5th. As the third episode was released on the second of August, and we have another week to wait for the fourth, it seems like an appropriate time to analyze the two series in a completely professional and unbiased manner.

Though the original series added some lovable elements to the Sailor Moon franchise, it’s no secret that the majority of the anime was ridiculous filler. The primary motivation for the remake is to make a series more faithful to the manga’s source material. I’ll miss getting to know the villains better, but filler was taken to a criminal level in the original, stalling character development and plot. The first three episodes of Crystal each correspond to the first three manga chapters, in which we meet Sailor Moon, Mercury, and Mars respectively. To compare, Sailor Mercury isn’t introduced until the eighth episode of the original. That’s an extreme delay to plot, even if the manga is a bit too fast-paced at times. The obvious winner of this round is…

Sailor Moon’s transformation sequence is iconic, and it’s important for it to be perfect because we have to watch it so many times. There’s no better way to compare the transformation sequences is than watch them. I’m not a fan of the new CGI transformation. Why are her limbs so… noodly? Toei Animation also managed to make it longer. I don’t know how anyone could have watched the original and thought, “Well, we clearly need to see the main character spin in circles for more time before we get to the action”–even if they did cut it down in episode three to allow the other girls some air time. The winner of the Transformation Sequence Award has to go to…

Related to the transformation sequence is the importance of music. I don’t dislike the opening theme of Crystal, it’s pretty epic with decent lyrics and some whirling guitar solos. I also like the choir that accompanies the most epic moments of the show. On the other hand, coming from a girl who has the original series’ transformation sequence as her ringtone, the old show’s music was catchy as heck. Though I like the suspense the new music creates, I miss the theme songs that would get stuck in your head for days, and I think a series that is ultimately made for kids should have that sing-along quality, so this award also goes to… 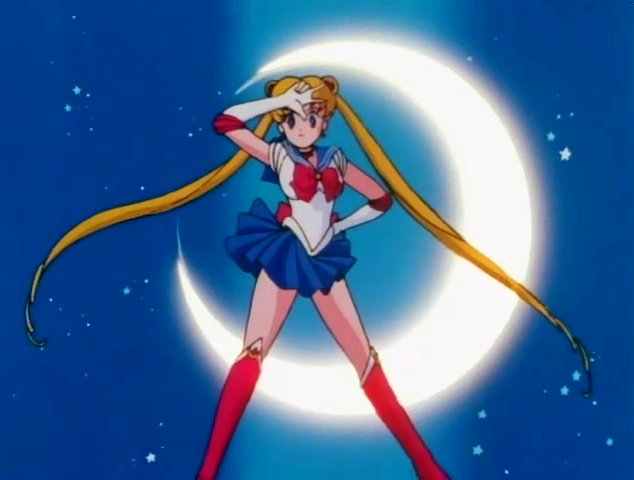 Here’s where I’ve seen the most contention about the new series. I will admit, Crystal seems to have missed the mark when it comes to animation. In the very first scene you can see the frames stagger, and there have been a few times I’ve winced to myself because the face proportions were so bad. Some of those close-ups make the girls look truly inebriated. The shading is snappy, though, and it has a much more modern feel. There’s something about the lengthened, looser style that embodies the manga better (at least to me) though why they thought it was a good idea to draw the lips in is beyond me, as that always looks creepy in anime. The old series certainly feels dated in comparison, and some of the drawings in it are just plain bad, too. Whether or not it was good for its time seems irrelevant.

I have to get serious for a moment, because I feel this is where Crystal is receiving the most criticism. People aren’t happy with the quality of the animation, some refusing to watch the new series. I have to point out that maybe Sailor Moon isn’t being remade for you. By you, I mean the other 20-somethings who wanted it to be the high-budget remake that encapsulated all of their dreams while still reveling in the power of nostalgia. Sailor Moon Crystal was made for two reasons–to closer follow the story and character development presented in Naoko Takeuchi’s manga, and to bring Sailor Moon to a new audience. I want a new generation of girls and boys growing up with the feminine power of this set of magical girls. I want them to be introduced to the non-censored version of the content in Sailor Moon, and I want it to be theirs. Sometimes, a show will feel too dated to be relatable to a younger audience, but I don’t think kids will notice the animation quirks in the new anime as much.

So I’m giving this category to Crystal, which makes this competition a tie, and I think that emphasizes my points. There will always be people who prefer the quirk and fun of the original, but dismissing the remake because it isn’t perfect is unjust, and I think in the future there will be people just as loyal to the new series as they were to the old. In the meantime, we can enjoy the influx of Sailor Moon swag that will be in stores, and be content knowing that a new generation will learn that girls can be intelligent and powerful on their own.

This entry was posted by Mel Staten on August 13, 2014 at 5:26 pm, and is filed under Anime, Review, TV. Follow any responses to this post through RSS 2.0.Both comments and pings are currently closed.