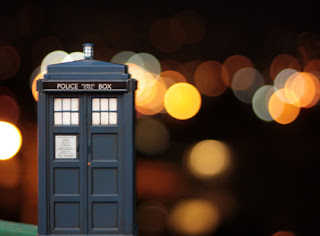 Ever had that moment when you’re just making stupid jokes with a friend and then suddenly inspiration hits? Well, that happened to a friend and just this weekend. I mention one of my many crafts, a pair knit gloves that I was going to sew the sew TARDIS onto, and suddenly we turned nerdy. I have been going through some Doctor Who yarn inspiration and was slowing to complete a set. And if I were to complete a whole set, according to my friend, I would gain the bonus ability of Time Travel. And through some more nerdy speak that has left most of my family speechless, we came up with a million and a half ideas for a tabletop Doctor Who RPG. Epic, right?

Well we met earlier today at a book store, plenty of inspiration and help around, to discuss and get a start on this amazing idea. About an hour into our talking and planning we had figured out that we had entered a whole new level of Nerd, we were off the charts, we’re had become level 80 nerds. And he’s a little more nerdy than I am.

What did we come up with you ask? Well, let me give you the short of it. Instead of classes there are vocations, and the races are practically Endless. You need at least one Time Lord and one Companion to play, and the max really should be three Companions and one Time Lord. You must level up your TARDIS to gain the extra rooms and upgrades, just like you must level up (essentially) your Time Lord’s sonic screwdriver. You complete quests and battles to gain new settings and operations for your screwdriver. A few other things also that we’re working out right at the moment. Instead of a Dungeon Master, there’s The Master (so far.)
Some of the Vocations we came up with were Medical Doctor, Soldier, Scientist, Civilian, and Scholar, and from there you can choose a minor vocation also. Each companion will have certain strengths according to the vocations your choose. The worlds and times you’ll travel to are practically endless, and you have to attempt to keep Earth History generally the same or your Time Protection Bar decreases. And so far the one rule that we know of; Captain Jack Harkness is a Fact.

So now we’re writing up descriptions, working some illustrations, and some skills calculations. We might just be a little Too excited for our own good. But you have to admit, this is going to be something Epic.

This entry was posted by Megara Noelle on September 27, 2010 at 5:23 pm, and is filed under culture, Doctor Who, gaming, RPG. Follow any responses to this post through RSS 2.0.Both comments and pings are currently closed.