As you all may or may not know, BBC America premiered the 15th season of Top Gear tonight. And I was there to watch it. Jeremy Clarkson, Richard Hammond, James May, and The Stig were back to show us some of the most powerful cars, show us stuff that we shouldn’t do, but what a car could (or could not) do. As was boasted int he commercials, this Series (season) is being shown in the original, un-cut, UK version, which was a stunning hour and twenty minutes long! Let me premise this review with the fact that the new episode premiered at 9:30pm (eastern) Monday night. BBC America was so excited for this that they in fact had a Top Gear marathon, but not just any marathon. This marathon started at midnight Friday night, all the way until Monday night, 52 hours of Top Gear. And I can proudly (kind of) say that I watched approximately 34 hours of this marathon. And now, onto the first episode of this exciting new series! 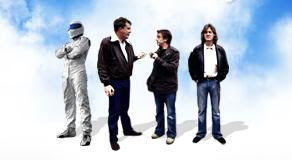 “Some say that his discharge is luminous.” All anyone ever knows is that he’s called The Stig, and today he drove the Bentley Continental around the track, listening to the sounds of vuvuzelas (that he invented, and… crashes?! The car exploded, flipping end over end! The Stig emerged from the wreckage, on fire, and managed to still cross the finish line! No one will know though, as we were shown Korean hatchback futbol! Jeremy Clarkson was as outraged as I was. The Stig even took off his helmet.

James May tackled the first challenge, driving up to an active volcano in Iceland. He took a Toyota Hilux Arctic Truck that had been driven to the North Pole from Canada a couple previous, and turned it into a Volcano Proof vehicle. He took the knowledge of wetting your feet to get across hot coals and applied that to getting across the hot grounds of the volcano. A system was rigged to constantly wet the tires as he drove, and to keep the water from freezing when he wasn’t by the volcano, vodka was added to the water. On the way tot he volcano though there was an intense snow storm that had actually taken the lives of two locals. So what was he supposed to do in this truck? Collect a souvenir of lava, as it was spewed from the volcano. But he stayed still too long and his tires caught fire and he had to move quickly. Upon victory he proclaimed “I claim you for Queen Elizabeth of Top Gear.”

Every series they put a celebrity into the Reasonably Priced Car and send them around the Top Gear track. This series they’re getting a new Reasonably Priced Car, and must then put the old one to rest. So what better way to put the Chevrolet Lacetti to rest than by giving it a viking burial? Getting rid of an old car that has been part of the family is hard because of all the memories that it holds, and this one was no exception. A few of the celebrities that had driven the Lacetti included Simon Cowell, Simon Pegg, Hugh Grant, Ewan McGregor, Helen Mirren, Gordon Ramsey, Jay Leno, and many many others.

What did this burial consist of? Chimneys, built in the 1960’s, over 550 ft tall had been filled with nitro, and the car parked underneath said chimneys. The poor Lacetti did not have a proper burial as the nose of the car was still sticking out of the rubble, shameful.

So to break in the new Reasonably Priced Car, the Kia Cee(apostrophe)d, Jeremy Cloarkson and Richard Hammond held star-studded tea party, with some toys to play with when they aren’t paying attention to the stars on the track, especially when it began to rain and the track started to become dangerous. The star who showed up? Most that I had never heard of, including Nick Robinson, Al Murray, Peter Jones, Peta 23 from Essex, Louie Spence (who was very friendly to Richard Hammond), a few others, and a very Different looking Angelina Jolie. 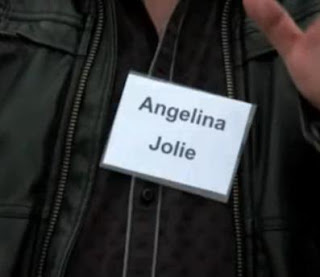 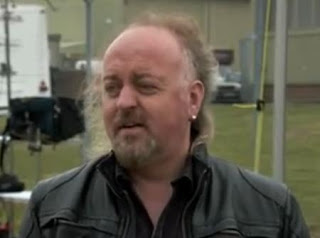 Richard Hammond decided to stay after the festivities had ended, waiting for the real Angelina Jolie, heroically. She didn’t show.

A new rule now says that any car that has 3 wheels is technically a motorcycle, and must now pay motorcycle tax, saving 55 pounds a year. The Reliant Robin falls into this category and Jeremy Clarkson decided to take it out for a spin. But the Robin has a single wheel in the front rather than the back, something that Jezza was very concerned about, donning a helmet and a four point safety harness in the car for safety. Which he would need for his challenge.

What was the challenge you ask? To drive from Sheffield to Rotheram, a perilous 14 miles. As he drove out of the lot he was parked in the car flipped on it’s side, skidding across the cement, as soon as he turned the wheel. In fact it seemed that almost every time he turned the wheel the car would tip onto its side. Sometimes he was able to push the car back up by merely opening the door and leveraging the door against the road, but most of the time he had to rely on the kindness of strangers to push him back up. Strangers that oddly enough he seemed to know, or knew where people would be, like a reporter from the BBC show Look North (where he tipped twice) and right int he middle of a cricket field while they were playing a game. At one point the car tipped back onto it’s two rear wheels and to avoid hitting anyone Jeremy had to drive into a lamp pole.

He found some Reliant Robin enthusiasts and got their opinions of the car, and they quickly told him that he was driving it wrong. You’re not supposed to turn, you’re just supposed to go in a straight line. Eventually he got tired of this tipping problem and took it into a shop, outfitting the sides with training wheels on the front, still making it a three wheeled ‘motorcycle’. He was so confident that his Anti-Cap-Size solution would work, right up until it failed, 6 miles from Rotheram, right into a pond.

A very serious show indeed. Some say that Top Gear isn’t a proper car show anymore, but I think that it’s a nice mix of car information (of cars that I can only dream of owning) and fun. Somehow through the seemingly ridiculous challenges you learn something about a car, also you learn about stuff you shouldn’t do while driving cars. They do have segments for those who love cars and keep up with the car news. To me, it’s a nicely balanced show, and it’s something that even a non-petrol head can get into.

This entry was posted by Megara Noelle on September 27, 2010 at 11:40 pm, and is filed under Review, TV. Follow any responses to this post through RSS 2.0.Both comments and pings are currently closed.