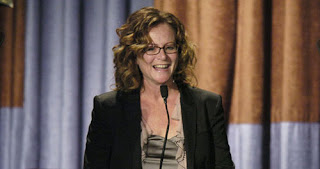 Today a truly awesome nerd girl pioneer passed away far too early in her life. Sally Menke, who edited all of Tarantino’s films in addition to 1990’s Teenage Mutant Ninja Turtles, was found dead in Bronson Canyon, Los Angeles, after having gone out to walk her dog last night.

Menke not only was a brilliant editor but she was a brilliant FEMALE editor in a world that does not give nearly enough attention to the awesome women behind the camera. She had been nominated for two Academy Awards for her editing work on Inglourious Basterds and Pulp Fiction and while she had not won yet, it was only a matter of time. I found a brilliantly worded article about the importance of her work on CinemaBlend and I have shared an excerpt of it below.

“It’s always a tragedy to lose anyone at the height of their creative skill and with so much left to offer– Menke was only 56– but that goes doubly so when it’s so unexpected. Menke received her second Oscar nomination just last year for Inglourious Basterds (the first was for Pulp Fiction), and it’s hard to watch that film without marveling at how the editing enhances it. Think of the long takes in the opening cabin scene combined with cuts between the two actors’ faces. Think of the surprising jump in perspective in the basement pub scene, where you realize the German officer has been there all along, listening. An editor’s work must often deliberately fade into the background, but Tarantino’s films relied so heavily on Menke’s work that many consider her his co-author. It’s hard to estimate the impact this will have on Tarantino’s future work, and honestly, you wonder if his movies will ever feel quite right again.”

Watch any interview with Tarantino with regards to editing and you can tell how important Sally was to him and his work. Even more important, however, is that she was a female nerd that made a massive name for herself behind the camera. Not only was she nominated for two Oscars in a field that few women get nominated in regularly (with the exception of Scorsese’s editor Thelma Schoonmaker), but she worked with action films that were overly gory and not typically considered “chick flicks.” Her first major project was Teenage Mutant Ninja Turtles people! I mean, how much more awesome does it have to get? As a female sound editor I can attest to the fact that it is not horrible nor impossible for women to get jobs in editing houses but we are definitely still the minority. This is not intended to be a feminist rant or to blame men for “keeping us down.” Far far from it. Instead, I just want to recognize how truly awesome this woman was and how important she was for future female film editors who might want to work on films of all types, including ones that are heavy in violence or even VFX.

This entry was posted by Stephanie Haley on September 28, 2010 at 11:25 am, and is filed under Life, Movies. Follow any responses to this post through RSS 2.0.Both comments and pings are currently closed.