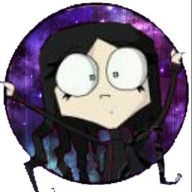 Sparkles is a multi-talented, many-hat-wearing kind of gal who harbors severe issues with authority. Once in grade school, she vandalized a Social Studies book by cutting out her face from one of her wallet-sized schools pictures, and taping it over the face of an Indian child picking leaves for tea....and left it there for the kid who was lucky enough to have that copy the following year. (She later received that book as HS graduation present from that teacher....taped picture still intact!) As far as we know, her crime spree goes unabated....

I suppose that people that have never been over my family’s for Thanksgiving find Alien vs. Predator pretty scary.

I am very pissed off at my uterus right now. Let’s see how long you can last without me, b@#$h. I control the chocolate!!

You know it was a good night when your car smells like a Red Lobster dumpster the next morning.

Here are the vanity cards from Chuck Lorre for the last two eps. of “Big Bang”. I adore this show–enjoy!
ø¤º°Sparkles°º¤ø

When I’m not working on The Big Bang Theory, I work on other TV shows. One of those shows gets a lot of bad press. Sometimes, when I read the very unkind things written about that show, I’ll remember the words of a sleazy music manager I was briefly associated with back in my rock ‘n’ roll days. The guy was right out of central casting. Bald, middle-aged, pot-bellied and sucking on a cheap cigar, he would sit behind his metal desk in his ratty little office and pontificate to dumbass musicians hungry for career guidance. One of his speeches has remained vivid in my memory for thirty-five years. He said, to a soon-to- be-nonexistent, dumbass power trio I was then a part of, “Boyz, if halfs da peoples loves ya, and halfs da peoples hates ya, you’re a star!” At the time I had no idea what he was talking about. It wasn’t until fifteen years later when I was writing for a TV show called Roseanne that I figured it out. I was once again reminded of all this when the star of the show I was talking about earlier came out for a curtain call in front of a packed studio audience. They went wild with applause. I looked at the man taking the bow and thought, “there is a big star.” Then I looked up at the screaming, cheering audience and thought, ‘there are halfs da peoples.’ ”

Mornings are the worst. The mind seems undefended, easy prey for both memories and imagination. What happened. What should’ve happened. What might happen someday. Your fault, my fault, no one’s fault. The only way to relieve the torment is to get up, empty the bladder, drink the coffee, read the paper, run the treadmill, perform the animal sacrifice, paint the chicken blood on the groin and call upon the demonic spirits to bring you back.

Nights are bad too. Once again, exhaustion makes the mind vulnerable to obsessing over woulda, shoulda, coulda. The only thing to do is sit alone and eat the chicken which was senselessly murdered in the morning.

To Write Love On Her Arms Day

by Sparkles Fantastic in culture, Life

Today is “To Write Love on Her Arms Day”. If you haven’t heard of this or don’t know what this is, Please visit their website —www.twloha.com –.

In short, To Write Love on Her Arms is a non-profit movement dedicated to presenting hope and finding help for people struggling with depression, addiction, self-injury and suicide. TWLOHA exists to encourage, inform, inspire and also to invest directly into treatment and recovery. Having suffered from depression throughout my life, this cause means a lot to me, and I would love for everyone/anyone who deals with these issues to become apart of this movement. There’s a beautiful/encouraging story that is told on the main website about how it all began, and I invite everyone to please…just for today…write the word “Love” on your arm.

I can feel my brain giving me the finger.

Watching Alien vs. Predator 2. Because I can’t be an intellectual every minute of the day….

Random Thought of the Daaaay…!

Remember what we’ve all learned from the ads: “My opponent sucks. Vote for me. I approved this commercial” GO VOTE!!

If my phone couldn’t spell plethora, do you honestly think I’m going to let it give me directions?