by cranialspasm in Review, TV 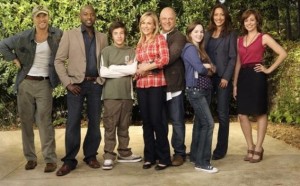 Cast Photo of No Ordinary Family

We’ve all experienced it. You grow up and have tense moments around your family. You wonder how you can possibly reconnect with those that are supposed to be the closest to you. ABC is tackling this family dysfunction in one of the coolest ways possible…

The Powell family has grown further and further apart. Stephanie (Julie Benz – Dexter, Angel) is a research scientist who is struggling to find the time to do everything she can to keep competitive in her field and still be there for her family. Jim (Michael Chiklis – The Shield, Fantastic Four) is a sketch artist for the police department who feels his marriage is slipping away, he’s losing touch with his children and he isn’t sure of his purpose in life.

That is why Jim urges his family into joining Stephanie on a research trip to Brazil. When they are there he ropes them into a sunset plane tour of the rainforest. Unfortunately, they are caught in a terrible storm and the Pilot (Tate Donovan – Damages, Painkiller Jane) warns them to brace for impact as they crash into a body of water.

The family surfaces and they make their way home. Jim hopes that the near death experience would bring them closer together, but finds that their mundane routine is a hard one to break.

Jim is at work one day when he notices something that is completely against natural law. He can catch bullets. Upon further testing, he finds that he possesses immense strength and durability. Unsure as to what it exactly means, he enlists the aid of his friend, a District Attorney named George St. Cloud (Romany Malco – Weeds, 40 Year Old Virgin). After proving the existence of his powers, George eggs him on to try outlandish stunts and to also tell Stephanie.

What Jim doesn’t realize is that Stephanie is exhibiting superhuman abilities as well. Their daughter Daphne (Kay Panabaker – Fame, Nancy Drew) mourns her new “freakshow” ability to read minds. The youngest Powell, JJ (Jimmy Bennett – Orphan, Star Trek) wonders why his family members all received special powers while he is the same old kid with a learning disability.

I had the pleasure of watching the pilot episode online and enjoyed it so much, I watched it a second time with a friend. She apparently thinks I have a superpower and she has adopted a Veruca Salt mentality. “Next episode! Find it! I want to watch it NOW!”

After the pilot episode:
Favorite Characters – Stephanie, Jim, and George
The dynamic between Chiklis and Benz is fantastic. The Powells aren’t the Cleavers, but I think that Jim will get his wish and will get to reconnect with his family. They are far from perfect, and I LOVE that. I cannot wait to see where the relationships go from here.
George is hands down my favorite. In one episode, Malco is run through the emotional gamut. He delivers my favorite line of the episode. I won’t ruin it, but it is in the baseball scene.

Least Favorite Character – Daphne
Daphne is the typical angsty teen of her generation. Take a Linkin Park song, a little Sylvia Plath, and a heaping spoonful of Bella from Twilight. If she starts toting black eyeliner and writing poetry I might vomit.
I’d love to see her going one of two ways – psychotic, like Jean Grey in the Phoenix Saga or she could go the route of the villain and be the greatest grifter in the world.

One thing is for certain. September 28th, my DVR will be set to ABC for what I hope will be a long running show.

If I can impart any advice for the ABC writers it would be this – I would hate for “No Ordinary Family” to become “That Ordinary Family”. If everyone starts becoming super, then no one will be.

I’d also be interested to see how they all face with the moral dilemma of whether or not to use their powers for the good of the world.

No Ordinary Family Premieres on 9/28 on ABC. Please check your local listings for broadcast times.

by Sparkles Fantastic in Review, TV

My inner FanGirl is definitely sqeee’ing this week because all (most) my fav TV shows are returning this week, after a very loooooong summer. There were a few shows that kept me going until this week—“Haven”, “Eureka”, “Sherlock” (BBC), “Rubicon”, “Lie to Me”, “Warehouse 13”, “The Closer”, “True Blood”,—with Honorable Mentions going to “Mad Men”, “Leverage”, “Man vS. Food”, “Hoarders” (HaHaHa!), “The Gates”, “White Collar”, “Weeds”, and “The Big C”.

I think the shows that I’m most excited to see are “Fringe” and “Supernatural”. I liked last season of “Supernatural” with the addition of the Angels into the mix because there aren’t a lot of series that show the other side of Angels as vengeful tools of God. I hold a special affection for that show because most of Sam and Dean’s cappers happen in the Midwest (which is where I live) and the license plate on the Impala is always an Ohio plate. (I lived in Cincinnati for the majority of my 20’s and consider it the place that I “grew up”.)

I’m also excited to watch everyone’s favorites—“The Office”, “30 Rock”, “Grey’s Anatomy”, “Chuck”, “Castle”, “CSI LV & NY”, “Bones”, and “Glee”. I watched the premiere of “Boardwalk Empire” on HBO the other night, and feel that it’s going to be good. I can usually judge whether or not something is going to make it within the first two episodes, and “Boardwalk” had me on the first episode. I watch the premiere of “The Event” last night, and it reminded me a lot of “Lost”, which is unfortunate because I stopped watching that show after the third season. I know that a lot of you loved it and were totally obsessed with it—like one of my brothers—but I just felt that the last two seasons were too farfetched, and kind of pretentious.

Aside from counting down the days for “Doctor Who’s Christmas Special” and the beginning of that show in the Spring, what are some of the shows that you are waiting on pins and needles to return/watch the premiere?