Looking for more Steampunk in your fantasy Sci-Fi books? Tired of the same old settings of modern times or the future? Well, I have a book that can give you that change. I present to you a book with Werewolves, Vampires, and Victorian scandal. In Gail Carriger’s first book of the Parasol Protectorate series, Soulless, we follow Alexia Tarabotti as she fearlessly makes her way through the world of the supernatural. Of course it helps that she has no soul, one of the rare ‘Preternatural’, something that she inherited from dead Italian father, quite scandalous. We find out right away that her preternatural abilities help her face down the supernatural, they can turn Vampires and Werewolves human for as long as they touch her.

Following Alexia through this supernatural murder mystery we watch as she interacts with some of the most powerful and well known Hive and Pack members of society. And she does all of this in secret as she keeps her own status a secret from her family. Alexia Tarabotti is one of the most unique characters that I have encountered, and I taught myself to read when I was four and haven’t stopped, so I’ve read through my fair share of books. She has elements of almost every female main character. She can kick-ass when in a tough situation, but will still ask for help and use her womanly wiles, and still manages to have some time to focus on what she thought was a non-existent love life. My favorite character has to be Lord Akeldama though, a very eccentric vampire who loves color, art, and many other exciting and loud things, and people. Although, I won’t lie and say that I wouldn’t love to meet the loud, brash and very handsome werewolf Alpha, Lord Maccon.

Alexia Tarabotti is headstrong, and stubborn, (much like my family) and despite almost everyone she knows telling her not too, she investigates the appearances of vampires and disappearances of werewolves on her own. It gets her into trouble more often than not, but where’s the fun in life without a little excitement? Am I right? Being labeled a spinster helps her not draw attention though, as it is quite scandalous for a woman in the late 1800’s to be talking to scientists, and reading more than her fair share of books. Sounds like my kind of girl. All she really wanted was some treacle tart.

Overall, I was very happy at the end of the book. It can be read as a standalone, the story wrapping up without having to impatiently wait for the next in the series. But, you’ll want to continue reading the series because Miss Tarabotti is the kind of character that you want to know what happens to her, what kind of trouble that she causes, and if she’ll get out of it. I’ve added Gail Carriger to the list of authors I regularly look for when I visit a book store thanks to this book. If you want a little bit of steampunk and science in your Victorian novel, I highly recommend Soulless and the two following books in the Parasol Protectorate series, Changeless and Blameless.

The Affinity Bridge by George Mann

I find most of my books, which turn out to be my favorites, by the book cover. This particular book I found mere weeks away from the World Steam Expo. I say this because on the cover of The Affinity Bridge is a large dirigible. Take my money, please. “A Newbury & Hobbes Investigation” the cover reads, “Steampunk is making a comeback, and with this novel Mann is leading the charge….” The Guardian dropped in, and some of the best reviews I’ve seen on the back. “An enormous pile of awesome.” Author Chris Roberson boasts, while the SF Signal says “Captures the Sherlock Holmes feel. Never a boring Passage. A Hugely entertaining book.” Steampunk and Sherlock Holmes in writing? Okay, now I’m just throwing my money at the cashier.

I wasn’t disappointed. It’s the early 1900’s, 1901 to be exact, and shipments and people coming back form India seem to have brought back a plague of some kind. Fog covers the streets, thickest in the morning and at night, and there’s a general warning out that no one is to travel the streets after sunset for fear of the plague ridden. One bite or scratch from these people will pass the plague, and those infected have merely three days before all hope is lost. Of course, those of us in the 21st century have a name for this, zombies. That’s right, I said zombies. Let’s tally this up so far. Sherlock Holmes, Steampunk, and now Zombies.

The enigmatic Sir Maurice Newbury is assigned a new assistant, Miss Veronica Hobbes, by the Queen herself. As soon as Miss Hobbes arrives they are thrown right into a new case, an airship crash where the automaton pilot has gone missing. They have to find the pilot, and find out why it malfunctioned when its creator claims that it can’t possibly malfunction, and investigate a string of murders committed by a glowing constable. The two cases can’t possibly be connected, so what to do what to do. The Queen is very interested in the airship crash and they’re starting to feel the pressure.

George Mann has created a world where things happen with plausible explanations, not where we’re asked to believe everything just on faith. It’s a blend of History Fiction and Sci-Fi/Fantasy that pulls you in. I usually only read Fantasy and High Fantasy novels, but with this book I find myself looking for Mann in the fiction section online and in real life for any new books. The way that Newbury and Hobbes work together gives a Holmes and Watson feel, but they have their own personalities and quirks. Headstrong Hobbes gives no real fuss when it comes to investigating or chasing down suspects, but enjoys a formal gala event and picking out the colors that she’ll wear. Newbury gives a feeling of cool calm and collected while craving and absorbing knowledge quicker than a sponge in the ocean. George Mann has a style of writing that I can only strive for as a budding author, and I personally can’t wait for the next Newbury and Hobbes installment, and if you want a mix of Steampunk, mystery, a touch of supernatural, and zombies, I think I found a book that you should give a chance.

Project For a New Mythology

by Prof. Jenn in Fiction 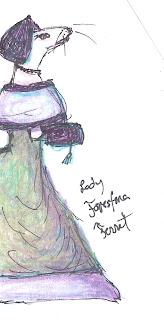 Any of you who are writers (or readers!) should stop my my friend Jason’s online ‘zine, The Project For a New Mythology. This issue, it’s all about the REMIX! That is, take any of the work you like and riff on it! Make sure you let me know if you riff on mine, so I can get all psyched.   ~Jenn

The Apollo Awards: Neat Idea or Cashing In On Nerd Culture

by Jules in culture, Movies, Science Fiction, TV
Let’s have a discussion. I have to thank one of my Twitter followers (@dr_lindyke) for inspiring this blog post.

Earlier this morning on Geeky Pleasures, I posted the following press release. Click the clip below or you will be a wee bit lost on this topic.

Not receiving any feedback, I asked the following question on Twitter:

Do you see it as geeks/nerds choosing what they actually like without mainstream telling them what is or is not cool or do you think it is profit grab?

Do you like this idea or does it bother you?

Do you think these are awards are filled with irony due to popularity factor and as geeks and nerds we shouldn’t care about that?

What other issues do you see with this, if any?

What do you think?