Zombies! Are they people too?

When Halo: Reach came out, I thought that would be enough to keep my better half entertained for a while and that we would be trading in our old XBox towards one of my games(namely Fallout: New Vegas)but alas I was mistaken.

Dead Rising 2 came out this past Tuesday and yours truly got sent to go and pick it up after I was sick for most of the day. This is not a game I would ever enjoy playing I don’t think but I have to say, the weapons you can create…they are EPIC with a side of AWESOME. My new personal favorite is the homemade lightsaber, created using a flashlight and gems…which you bust jewelry store cases to get to. The ridiculous amounts of zombie carnage warm my heart and make me giggle like I used to while mooning over a boy band at age 10. The story leaves something to be desired but the crazy weapon combos(like the IED made out of a propane tank and nails, or the 2x4s attached to a lawnmower which makes a very efficient zombie grinder), and the really sweet costumes were enough to make me actually put my iPhone down and watch the game.

It’s not one I’ll play…but I could watch my husband kill zombies with a smile on my face for hours…:) 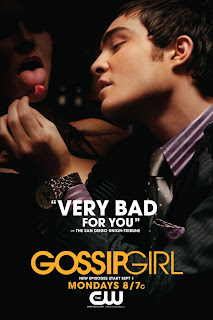 In honor of CranialSpasm’s awesome guilty pleasure post, I have decided to admit my own guilty pleasures: Gossip Girl. I know, I know, I should be ashamed to call myself a nerd and yet love this ridiculous teen drama but I can’t help it. As a girl that grew up loving 90210, Gossip Girl is the closest to the over-dramatic teen soap opera. Something about watching a bunch of privileged teens whine and mope about scenarios that are not even remotely believable just sparks the fangirl in me. Plus, it doesn’t hurt that I view Blair Waldorf as the modern day equivalent to Scarlett O’Hara and I just love watching a good biotch on TV.

I think another part of my love for this show is that I view the the “un-reality” of Gossip Girl almost on the same level as Scifi or fantasy. I know it’s a stretch but, again, there is practically nothing even remotely believable about the show and it kind of helps me live out different sort of fantasies that I would never actually be able to partake in (or even WANT to partake in). Plus, I mean, Gossip Girl has a blog! That’s nerdy, right? 😉

I also read the books occasionally. I suppose that is my ultimate embarrassing admission here but sometimes you just need a good trash novel. It does kind of depress me that this is what “young adults” read now when I use to read the Babysitter’s Club and X-Men but oh well. If you can’t beat ’em, join ’em.

I should also add that very network TV show impressed me with regards to online fan interaction. The Second Life world of Gossip Girl, the twitter/blogs, etc. They are all pretty cool ways to get people more involved in a show that they love and I consider most things that do this at least partially worthy of attention from the online community. It requires creative, talented artists and engineers to create these worlds, in addition to the studios/writers of the actual program. 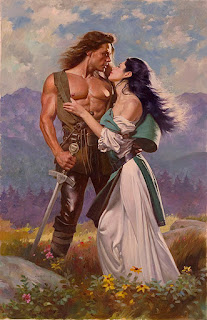 It seems now that proclaiming yourself a “nerd” is the cool kid thing to do. I’m with Hardwick. I suffered so little kids can wear SNES faded tees that say “Old School” and a part of me hates myself for it. But I digress.

So in an effort to break from the mainstream, I have decided to return myself to uncomfortable nerddom. I have a secret shame. Well, in thirty two characters, it will no longer be a secret.

Yes, that’s right. I am absolutely enamored with those books. A story with a disfigured man and a countess hiding from the law? YES! A vampire that doesn’t sparkle who is completely obsessed with a nobody paralegal? I just snagged it for my nook. I swear that my life would be complete if someone gave me the Wil Wheaton and Felicia Day romance cover ripoff that Zaboo gave Codex in Season 4 of the Guild (RUNON’d!). I would probably record myself squeeing for about a minute and post it up on youtube for Daniel Tosh to make fun of.

I could keep spouting out the various storylines that seems to always be recycled in the romance genre, but as this is Nerds in Babeland I figured I would toss in some romance novels geared mainly to the Velma in all of us.

The Nerd Series by Vicki Lewis Thompson ranges all over the nerdometer. Granted, you know how they’re all going to end, but they are hysterical reads nonetheless. I found myself at points shouting “a f***ing model would not be trying to engineer a hovercraft”. Oh yes, those words were uttered from my mouth. I would suggest that if you do invest in the books, you do so on a nook and make use of the LEND ME feature. Make six friends and each buy one! Save money and read about nerdy sex!

For the comic book nerds who adore the idea of superheroes, there are a series of books set in the fictional town of BIGTIME, New York. This series by Jennifer Estep, make for a fantastic read.

Bigtime is chock full of superheroes and supervillains. The entire series starts with a perfectly average girl on her wedding day. Something inside her pulls her to find her soon to be husband and she walks in on him doinking her maid of honor. But that isn’t the part that shocks her the most. She realizes that the man she thought she knew was a superhero and the best friend who she shared her deepest darkest secrets with was an ubervillain. She vows to unmask the superheroes of the world for the good of the people around them.

BIGTIME Series by Jennifer Estep
Karma Girl
Hot Mama
Jinx
Please feel free to check them out! If you have any suggestions for books, don’t be stingy! Leave a comment!
CranialSpasm
Bigtime guilty pleasure romance novel The Nerd Series
Go to Top