Oh, Saga, how you play with my emotions. The games this series plays are heartbreaking, thrilling, disturbing. The opening scene of issue #12 is a prime example. Prince Robot IV has been wounded in war and calls upon the aid of the medic, a mouse-like creature with healing skills. As the medic administers medicine, he explains that he’s not a native to the planet but is supporting Prince Robot’s forces in hopes of earning his degree and as thanks for their help on his home planet. It’s almost warm and fuzzy until a poisonous gas is released upon the unit and the medic reveals that he wasn’t given a mask to protect himself. It gets messy from there.

In the present day, Prince Robot is on a mission to track down Alana and Marko, like so many others. His government has their own reasons for wanting to dispose of the forbidden family. He’s landed on a solitary , foggy planet where he believes a reclusive author can lead him to the fugitives. Mister Heist wrote a romance novel that Alana and Marko are fans of; the book is believed to be a revolutionary text in disguise and Prince Robot thinks the novel was the inspiration behind the couple’s idea to run from their homes and duties.

The majority of issue #12 is focused on Prince Robot’s verbal chess game with the intelligent author, trying to surmise if he has knowledge of the whereabouts of Alana, Marko and Hazel. It’s not quite as much fun as the usual plethora of alien creatures and formidable planets, but it’s engaging and imperative to the story line. And as usual, the issue sets up an exciting and tense possibility for the next one to come. Holy shit, does this book perfect story telling. Magnificent artwork accompanying genius writing makes Saga an absolute masterpiece of a comic book. I’m not sure how many ways I can say that I love this series, but I’ll keep trying.

Boy does Brian K. Vaughan know how to open an issue and get your attention. In another of Hazel’s flashbacks to her parents’ beginnings, we get to be a fly on the wall to what I assume is her moment of being conceived. Every naughty detail revealed and oh boy, is Alana naughty! Of course it’s also a difficult realization of the kind of situation Hazel was brought in to: her parents fugitives, each of their respect homelands hunting them down. Alana and Marko aren’t even sure they can breed, being of two different species from different planets, but the method of baby making seems to work just fine.

Another great skill of Brian K. Vaughan is transitioning from one place in a story to another, seamlessly, without depleting the jarring effect of that jump. The ship containing Alana, Marko, Hazel, Marko’s parents and Hazel’s ghostly babysitter is spiraling towards a freshly born fetus planet that appears hungry. In another ship which has already been damaged and exposed to open space, The Will tries to save Lying Cat while Gwendolyn holds tight to the slave child they rescued from Sextillion. If you aren’t reading Saga already, you should be appropriately confused by now.

Every single issue of Saga contains so much. So very much that I often find myself re-reading an issue to make sure I didn’t miss something really important. Issue #11 is powerful and emotional. I’m not going to spoil this for anyone, but I will say that by the end of this issue you’ll feel some feelings that might not be happy. This issue also has many opportunities for Fiona Staples to show off her art skills with sweeping space landscapes and beautiful scenes of magic making. The creators of Saga are the power couple of 2013 and Saga is their glowing love child.

Read Saga and don’t stop. Well, if you read one issue you won’t want to stop.

Marko and Alana are the hottest couple in comic books. Does anyone not know that by now? The opening of this issue is yet another fantastic example of Brian Vaughan’s perfect writing in this series. The first panel, Marko standing shirtless, gently asking “Please. Keep reading.”, is not only sexy but gives the exhilarating feeling of being spoken to by this 2 dimensional book character. This leads to a touching peek at where the intense love between Marko and Alana began. I can’t recall ever reading about two characters in a comic book before that I felt so intimately connected with, as if Saga is really just the biography of a couple of very close friends of mine.

Then, there’s the hunt for the missing ghostly babysitter. Marko and his hard edged mother find themselves searching a strange planet that they’ve been told will soon be ‘hatching’. And yet another shining exhibit of why Saga has quickly gained huge praise and is selling out copies everywhere: incredibly fresh, creepy, awesome alien life forms and settings. It just never stops with this series, each issue throwing new and fascinating characters at you, opening up new worlds filled with completely unique adventures. No matter what comparisons you can make between Saga and other books or films that it shares style with, I honestly don’t think anything like this has been accomplished before.

To sum up this issue, Marko and Alana reunite with their missing babysitter, family ties are strengthened and a planet gives forth new, dangerous life. Gwendolyn, Marko’s bitter ex, is hot on their tail and employing the help of an infamous assassin and a child with special powers of sight. An unfortunate loss leaves us wondering how many more there will be before Marko & Alana are either captured or somehow escape for good.

Saga rocks my socks off, every freakin’ month. I dread the day that this series comes to an end, because it’s one of the most exciting, creative things I’ve had the honor of reading in years. The writing of Brian K. Vaughan and the art of Fiona Staples are a magical marriage that many, many comic book readers are thankful for.

Nerd Rap: A Gateway Drug That Won’t Put You In Jail.

﻿Oh Hai Internets! I have been spending a lot of time in my own head as of late (what with my jaw trying to kill me. Long story) and I finally feel well enough to dropkick the moon!

During the time that I have been immersed in a spiral of hate, I have backed away from websites so as to not angrily type something. Instead, I focused all of my energy on something that I love beyond measure – MUSIC!

To give this the nerdy twist it deserves, I have been infatuated as of late with two new types of rap that are quickly growing near and dear to my heart. No, it’s not Jonathan Coulton’s cover of “Baby Got Back”, even though that cuddles me with the gentle caress of a Peter Gabriel song (shut up). What I’m referring to are the completely different but totally palatable nerd rap forms of nerdcore and chap-hop.

But Ali, what are these two that you speak of?

First, I will start with Nerdcore. On the Netflix, I took a gander at the documentary “Nerdcore Rising” and found that it’s… well… nerdy rap. I wish I could describe it more definitively, but if you have read anything by me you know that I type faster than I think (and you get a bunch of internal dialogue in the process). These artists rhyme about anything from politics to science fiction and the name seems to have been coined by self described Nerdcore Musician MC Frontalot in the 2000 song “Nerdcore Hiphop”.

Here’s one of my favorites from MC Frontalot

From what I can tell the majority of this genre is self-published online and it is so full of DIY possibilities I bet Jackie’s brain is exploding somewhere. In fact, I want Jackie to do a nerdcore rap under the guise MC Cephalopod.

There isn’t a specific sound to this genre of hip hop, but a common theme is sampling from the most random places imaginable. Classical Music, movies, video games, and if it hasn’t been done yet, I would imagine samples from beakers and test tubes filled with various elements.

If you have any interest in checking out some artists, please have a listen to MCFrontalot, Optimus Rhyme (raddest name EVER!), MC Plus+, and Monzy. Or, if you need a gateway into this subgenre, listen to Weird Al Yankovic’s “White and Nerdy” parody as it steeps your ear canal in a three minute nerdgasm.

Chap-Hop is infinitely harder to explain as there is no dedicated wiki page to it and that is just rotten.

I do not know the origin of Chap-Hop, only how I was introduced to it. I had just finished podcasting with a bunch of friends and we were playing the “Have you seen it?” game with the YouTubes. This game is basically showing people something that you like that they have never seen. Enter Professor Elemental’s “Fighting Trousers”.

I could probably sum this up by saying that Professor Elemental is a Steampunk inspired character that burst forth from the mind of rapper Paul Alborough. I would love to talk to this man, but I’m afeared that I might daze out as I’m a sucker for the English accent.

He is currently in a feud with another Chap-Hop artist named Mr. B. As this is a very obscure art form, I have no other recommendations for you. I do, however, want him to come to the US for a lengthier tour than the three day stint at the Steampunk World’s Fair this May. I know this isn’t a platform to beg for money, but if someone wants to get me a ticket and hotel room I will go to the Steampunk World’s Fair and do video recaps. It’s a sacrifice I would be willing to make.

Happy Anniversary to Me!

by Prof. Jenn in Life

My husband and I celebrate our 11th anniversary tonight. Love is in the air… 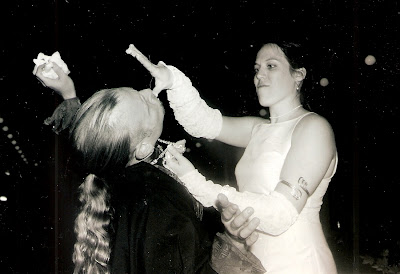