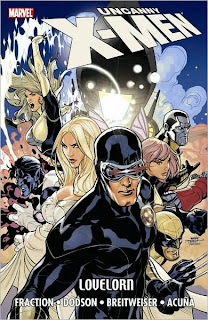 I’m going to preface this with an acknowledgment that these issues are old-ish. Unfortunately, as much as I love comics, I can’t afford individual issues of all the books I enjoy. Therefore I wait until they come out in graphic novel form and, unless it is a must-have like Gotham Central, I typically wait until they come out in paperback. Nothing at all against the books, just a necessity given my economic status :).

So, the plan for these reviews (on Nerds in Babeland), is that I intend to go to Meltdown Comics weekly and get suggestions from the awesome people that work there as to what I should be reading/reviewing. I have loved comics since middle school but I took a break in the middle (around high school/early undergrad) and therefore missed a lot and have been trying to catch up since. Chris (from the Meltcast podcast) has agreed to give me suggestions, because they are awesome like that. They did not ask me to do this promotion at all, just throwing it out there because I love love love comics and graphic novels and I think more people should support comic book shops. This happens to be the one I go to the most but there are other awesome ones in LA. Also, if you have suggestions for books I should read, PLEASE mention them in the comments section! So, yea. Onto the review…

That being said, my first graphic novel review for Nerds in Babeland had to be an X-title. They might not be the same quality as books written by Alan Moore, Grant Morrison, etc, but they were my first comic series. I have a loyalty to the X-Men and, as a result of my childhood, I always viewed myself as a “Marvel Girl.” Of course, things have since changed and there are quite a few DC/Vertigo books that are the top of my list in terms of favorite books. Still, my first review had to be an X-book.

Tons of great writers have done X-titles lately, including Ed Brubaker, Joss Whedon, and even Grant Morrison not that long ago. I had never read anything by Matt Fraction and I feel as though the Whedon/Morrison books have been reviewed plenty so I chose to go with Lovelorn upon recommendation from Chris (collecting Uncanny X-Men #504-507). Before anyone decides to pick up this book, I think it would definitely benefit you to read the Uncanny X-Men Manifest Destiny graphic novel to understand what has happened before the events in this book.

My own brief attempt at summarizing: Basically, during the events of the last major crossover, “House of M,” the Scarlett Witch caused about 3/4 of the mutant population in the world to lose their powers, thus making mutants an endangered species. For awhile no new mutants were being born, until the events of “The Messiah Complex” (which is the series that Brubaker and Mike Carey wrote). A new mutant was born but with that came the destruction/death of an entire town in Alaska thus, once again, making mutants hated (shock!). Shortly thereafter, the X-Mansion was destroyed…again. Instead of re-building it…again…Cyclops decides to move the X-Men elsewhere and they ultimately end up in San Francisco where the mayor welcomes them with open arms.

Yes, slightly complicated to follow but that’s basically what you need to know. Oh, and Kitty Pryde died during Joss Whedon’s run of Astonishing X-Men because, well, that’s just what Joss Whedon does. So, Lovelorn picks up after the X-Men have been living in San Francisco for a bit. Hate crimes have become prevalent across the US, even in San Francisco, thus further emphasizing the obvious metaphor for gay rights. Lovelorn basically focuses on two characters: Emma Frost/White Queen (who, if you didn’t know, is now a good guy and dating Cyclops) and Colossus. Both of them are dealing with serious love issues. Colossus is devastated with the loss of Kitty and Emma is trying to reconcile her past as a villainous with her present life with Cyclops.

I won’t get too much into plot, not because it will really spoil stuff but mostly b/c this is a super short book. However, while there are flaws with the story lines, I do really enjoy the new metaphor/direction that Marvel is taking the X-Men. Not that Civil Rights racial issues have been completely solved, but it is time for the X-Men to symbolize another social outcast group and I think this direction will be interesting to follow. As for Fraction’s writing, I really enjoy his sense of humor. There are some excellent one-liners throughout the book. My main problem is that, with the great one-liners, there are also some unnecessarily over dramatic moments. Moments where the characters state something that just seems unnecessary and kind of overdoing it. I did enjoy his tactic of inter-cutting scenes involving Colossus’ revenge storyline with a similar battle-focused storyline involving the Beast & Angel, but at times it made it a little difficult to follow what was going on in either story. Nevertheless, I enjoyed his writing enough that I would definitely want to read more of his stuff. 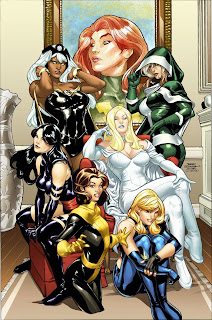 As for the art, I am a fan of Terry Dodson. I love the way he draws the characters’ features in a way that is both simple and yet has enough detail to depict exactly how that character is feeling. Plus, even though he may emphasize boobs a bit too much on the ladies, I think his women are gorgeous. One of my favorite recent covers for the Uncanny X-Men is the cover with all the female X-Women (shown to the side). It might not be from this specific collection of comics but I had to share it. Love that Phoenix is in a frame behind them all.

So, yea, if you aren’t an X-Men fan then I wouldn’t recommend starting with this book (go pick up the Dark Phoenix Saga in TPB…seriously, it’s amazing). However, if you are a former X-Men fan and feel like just picking up a simple, small book to check out, I recommend either this book or the Manifest Destiny graphic novel before this book. They’re both relatively inexpensive (Lovelorn was only $16) and both have excellent art/writing.