Yes, today is the birthday of both Molly Lewis and Chris Hardwick! But they’re not alone!

According to “Brainy History”, they share this day with:

Plus a lot more… You can find that info on their site.*

I know all the Nerds in Babeland wish you two the very best of birthdays! May today be filled with everything you want and nothing you don’t! I got a bit verbose in wishing them the best so I did two posts explaining how I was introduced to these two spectaculous** people and why you should be as enamored with them!

For Molly: Today is Molly’s 21st birthday. I am probably not the only person letting out a sigh and muttering “FINALLY!” Molly is an extremely talented musician who had some pretty rough experiences this year when asked to join in on the w00tstock fun (among other appearances). Even though she was a performer, she was not able to chill inside the venue when w00tstock held hands with SDCC the weekend of July 23-25, 2010. So, being the adventurous (and most likely bored) girl that she is… NINJA GIG outside! She took requests and hung out with people until she was able to go in to perform, then I believe she returned and chilled some more. I didn’t get to go. I was stuck on the East Coast. If anyone has vid of the NINJA GIG I would love to see it! (I keep going at this point. Too much for this double birthday post.)

For Chris: Besides his time as “Hard” (of Hard’N’Phirm), Chris also has his hands in many other pots. So many, I’m thinking he’s part octopus. An octopus with pots of something. Chris writes for Wired, hops into reviews for G4′s AOTS most recently sporting an admirable lipwarmer (That’s a mustache, ya’ll), hosts Web Soup on the G4, rocks the stand-up stage, tweets like a maniac, live-actions (Yep. I just made that a verb.) in some stuff and lets Rob Zombie kill him, does a lot of voiceworks, hosts his own podcast, blogs for his own website, and co-birthed a nerdsourcing website that he provides bandwidth for. (Once again.. I keep going.)

So Happy Birthday Chris and Molly! If I knew how to make this, I would send each one of you a shark car. Because… Well… It’s awesome.

* By the way Jules… I’m so happy you introduced us to this Curate thing. It’s wicked friggin shiny. I’m going to abuse the heck out of it.
** I use made up words. But… If you watch BSG, you should be used to that already.

by videogamedoc87 in Fandom, Live Comedy

Last night Mr. Doc and I attended the first ATL show of The Nerdist. In a word…it was AWESOME. We had FREE front row seats, and it was well worth driving in ATL for the first time. There were four comics before him. I really enjoyed this one named Patton Smith, he was pretty freaking funny. But he was nothing compared to the man himself, Mr. Chris Hardwick. About 30 minutes in he came over to our side of the stage and mentioned that he liked my Dr Who shirt, he then asked Mr. Doc what he was wearing, which was a Stephen King Dark Tower t-shirt. Chris told us we were adorable. He asked how we met, and was somewhat incredulous when we informed him we met while selling firearms at a local Bass Pro. Later he found out we had been truckers too, then he found out I had been to China. After he and I had about a 20 minute conversation in the middle of his show, he proceeded to say that Mr. Doc and I were the most interesting people he had ever met. I find this hard to believe but it sure was nice of him to say nonetheless. I got a hug and picture afterward and went home a very happy bunny indeed.

by cranialspasm in Comic Con, convention, culture, Fandom, fanvid, Interview
I’m too exhausted to figure out how to add a podcast to my actual website, so I found a place to host it for free. Sorry about the ad at the beginning.
I had the opportunity to interview Clay Robeson, the dynamite mind behind “Frak You”. We talked puppets, nerding out, plugging the Node “in non dirty way” and odd Google searches. Probably NSFW. Actually, most likely NSFW.
I also soapbox. What can I say? Interviews = opinions. My opinions may not coincide with all of the other NiB (That’s short-hand for nerds in babeland.)
Here’s a teaser picture that you will get about 40 minutes in. You’re welcome. 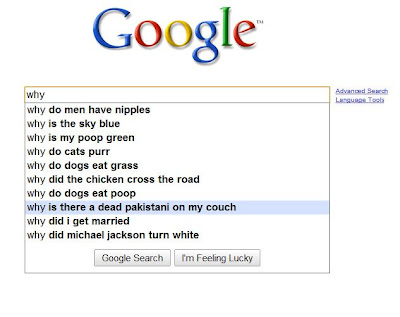 If you are opposed to me getting tipsy and talking to Clay, this is not the interview for you. If you want to giggle and hear about upcoming awesomeness… LISTEN!

Here are the links!

LOST: For the First Time

by cranialspasm in Review, TV

Yes, that’s correct. I’m late to the game of watching LOST. I have just started Season one and was originally going to post a short WTF after finishing each episode, but when I started taking notes, I found that my brain went in all directions. I have shared my impressions with those in the Node, but for those of you who haven’t yet joined I figured I would make the doodles available for all.

Here is the only one I could post on here as all the others are incredibly NSFW. The gallery will grow in time, but if you want to catch glimpses into the opinions of someone staring at the show with fresh eyes, the gallery is here.
Enjoy, leave comments, but please don’t spoil it! I have managed to make it six years without knowing ANYTHING about this show! 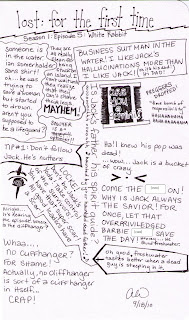 Oh, for the big Jack and Kate fans… Yeah… I don’t like them. That’s my opinion for the moment. Who knows. Maybe in one of the future episodes Kate will burst forth from the jungle riding a polar bear while brandishing a spear and take out Charlie… then I will hate her.
doodles gallery Lost no spoilers please Node nsfw season 1 wtf 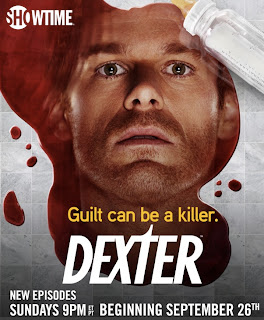 Hello my fellow nerds and nerdettes!

I’m here to write a review of tonight’s premiere episode of Dexter. After a long summer everyone’s favorite serial killer has come back to television, and I think Season 5 has quite a story to tell. The first episode picked up where the suspenseful season 4 left off, with Rita dead in the bathtub of the marital home she shares with Dexter and poor baby Harrison in a pool of his mother’s blood. The season starts with Dexter in a state of shock, full of uncertainty as to what will become of his double life (blood splatter expert and dad by day and a serial killer by night). Trinity (a serial killer from last season played by John Lithgow) killed Dexter’s wife before Dexter killed him, however, Dexter is the only one that knows Trinity is dead. Most of Dexter’s fellow police officers suspect Trinity as the Rita’s killer, but the circumstances around this murder and the suspicions Quinn already has about Dexter puts suspicion on Dexter similar to that from Officer Doakes in season 2.

Guilt is eating away at Dexter throughout this episode. He carries the guilt of being indirectly responsible for Rita’s death, the guilt of having to break the news to Astor and Cody (Rita’s children from a previous marriage), and the guilt of what may come of young Harrison (Dexter’s son with Rita). You feel this sense of confusion throughout the episode. You have no idea what Dexter is thinking. Typically he has no set of traditional emotions, but we can tell he is thinking of the feelings he had for Rita and trying to make sense of his own unique form of mourning. At this point we have Dexter’s flashbacks to his first dates with Rita which I found to be a wonderful part to this episode. It gave us more info on how they got together then just Deb setting them up on a blind date. But throughout all of this, Dexter has his only rock now, his sister Deb. Deb is now put in the position of being the strong sibling helping Dexter get things in order for Rita’s funeral. In the mist of all of this whirlwind of sadness and shock, Deb turns to her old ways of taking to the first man around her who seems to show some sort of affection to her, Quinn. At this point in the episode everything is becoming too much for Dexter. He thinks destroying his past and just taking a few things and running away from everything is the best solution for him and his family. During his little get away Dexter get’s into a altercation with a passerby and finally shows the first bit of real emotion he has shown the whole episode. He realizes this is not what needs to be done and that he has to go back because, in some weird way, his family needs him and he needs his family. I see that season 5 is going to be a rollercoaster of adventure and mystery with this new storyline unfolding.

Review by Tiffany (fellow Nerd in Babeland from The Node)

I am sooo buying this game. I cannot wait for this to be released! Hopefully someone in my area will hold a Release Event that I or Freddie can attend and we can blog about the details….

A wonderful nerdsourced production posted on The Node (@node) by fellow Nodist, Clay Robeson. Everyone needs to check this out. It’s brilliant parody of Cee-Lo’s Fuck You. Clay’s description:

When Cee Lo Green’s “Fuck You!” came out, a parody (not that it really needed one) sprung forth into my head full born, like Athena from Zeus’ big ol’ melon.It was, of course, wrapped in the geeky goodness of Comic Con, and my own personal passion for puppets. The problem, as is often the case with puppets, is that you can never do it alone.And so I called upon my own personal nerd brigade to assist, and received extra vocal tracks from Colorado, and extra hands for puppets and eyes for cameras more locally.What resulted is something that we’re all pretty happy with.