Bids start at $15. Email bids to sponsor@geekgirl.com by 5pm tomorrow. Their facebook page has more details.

The group’s description in their own words:

Let’s face it, the male to female ratio at cons for panels is slightly off. Not necessarily on purpose…but it is. However, female fandom has shown that it is coming into it’s own as evidence of the San Diego Comic Con’s recent ‘Geek Girls Exist’ panel which had to turn people away at an already overpacked room. When you have fans fighting to get in to listen to women talk about their careers & fandom of the female realm, AND being up against the ‘Scott Pilgrim vs the World’ panel…there’s something to be said about that.

Not to mention the party, ‘GeekGirls & Friends TweetUp’, that had to turn people away after 200 guests packed Jolt N Joes in the San Diego Gaslamp district. We have Kristin, Jill & Andrea, 3 gals part of www.geekgirlsnetwork.com to thank for such an awesome gathering!

The best part was that the population of that panel & party was not necessarily all women! Guys appreciate what we gals do as well! We are into week 2 since idea conception and we’re constantly asked, “Can guys help too?” Of course you can! We are not trying to single you out of the equation of female fandom.

We know you love your girlfriends, wives, daughters, sisters, mothers, meemaws and/or friends who’ve taken their fandom to an all time high. Know that we haven’t forgotten about you guys! We are planning on having a GeekGirl Appreciation Stage as well!

But this con is for the ladies! What do you love? It’s not necessarily all froofy froo froo…it’s also badass, kickin butt stuff. Gaming. Movies. GeekMusic. Costuming. Comic Books. SciFi. Science. History. Technology. And maybe just a little bit of Roller Derby?

Why haven’t we had a GeekGirlCon yet? The idea of being a nerdy girl who’s interested in the same things as guys, isn’t a new concept…it just isn’t as widely celebrated. But that will all change with this event. Stay tuned. We’ll have some pretty exciting things coming your way.

Just a reminder that the lovely ladies of GeekGirlCon are still holding silent auctions via Twitter.  All items being auctioned off are donated by vendors/merchants, geeky crafters, GeekGirlCon organizers and anyone else who wants to make sure this event happens. All winning bids will go straight to GeekGirlCon. No bids are ever too small!

New auction items go up around Thursday or Friday.  I will continue to post them as they come out! 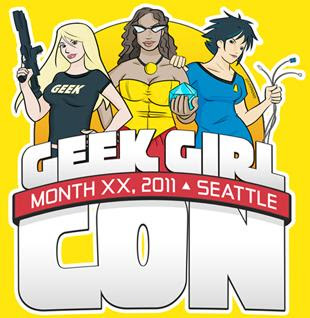 GeekGirlCon will be holding random silent auctions via Twitter. All items being auctioned off are donated by vendors/merchants, geeky crafters, GeekGirlCon organizers and anyone else who wants to make sure this event happens. Feel free to donate something awesome if you want. All winning bids will go straight into making GeekGirlCon be as great as we can make it. No bids are ever too small!