When a new book by someone like Stephen King is imminent, there is perforce lots and lots of hype. Especially through this particular label; Hard Case Crime is doing a really cool thing with its releases. The covers echo those of old-school pulp novels, and will always be real paintings, not digital works. They will not be published in e-book form, nor in hardcover, only paperback. Read more about the reasons for these (IMO: awesome) choices here.

So there are plenty of trappings and baggage already before one enters into a book like this. And when I heard “American nostalgia” I rolled my eyes, attempted to drown out the John Cougar Mellencamp song in my head, and took the plunge.*

Now I normally think of Stephen King the way I do about J.K. Rowling, and the way I used to about Anne Rice: an amazing storyteller, gifted as far as creativity and brilliant at character creation, just without the actual writing skill-chops to pull off the enormous ideas pouring forth.** Joyland, however, is an exception to this opinion of mine, and in fact makes me want to go back to other King pieces and see if I was wrong all along.

The story is told from the POV of our protagonist in his 60s, telling us the story of That One Summer as though we’re an old friend on the porch over a cold brew. The voice is parts dry humor, stoic melancholia at the passage of time, and pure wonder at the events narrated. The story itself centers around an amusement park, and our protagonist’s summer (and beyond) working there. It’s part warm and fuzzy coming-of-age story, part adventure, part eerie ghost story. In the best possible balance between the three.

I will admit, I did see ‘who dunnit’ coming. But not too soon, and I have a suspicion I only knew exactly when King wanted me to. The murder mystery is put forth perfectly–a writing professor of mine once said about murder mysteries: “It’s not what the reader knows, but when he knows it that’s important.”*** King feeds us just the exact right size and number of plot snippets at just exactly the right times through the arc of the story, until by the time we’re taking that final ferris wheel ride, it’s as tense and gripping (and admittedly over-the-top action movie fun) as it should be.

*It’s cool if you like those things–to each his/her own. It’s just not my thing.

**I have a feeling I’m dodging tons of hurled virtual eggs and tomatoes here.

***One Keith Abbott, from Naropa University. 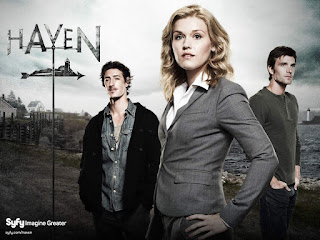 Since BSG ended I will confess that I did not have any show on SyFy that I watched every week. I loved Eureka but it was one of those shows that I would catch if I could remember. That has changed this season with the “re-boot” and I absolutely love where the show has gone but this blog post is not about the awesomeness that is Eureka :). Instead, I want to pimp one of my favorite new shows this year, Haven. I’m not sure how many people are watching it as I have stopped following ratings (don’t think they really show all that much info considering the billions of ways people can watch shows now). Nevertheless, I love it.

In case you aren’t familiar with the show, it’s based on a Stephen King short story entitled “The Colorado Kid.” It takes place in a small town named Haven, Maine (I know, shock!) and it involves an FBI agent named Audrey Parker coming to town in order to solve a mysterious murder. While there she discovers a photo of a woman in a newspaper article that looks a lot like herself. Audrey assumes this could be her birth mother and since she doesn’t know anything about her parents/history she decides to stick around and learn more. The photo is associated with a news article about the death of “The Colorado Kid” but no one seems to remember anything about the incident and, of course, this serves as the catalyst for the show.

Most episodes don’t actually focus too much on this mystery at first. The show has an episodic feel as Audrey learns more about the town and the “Troubles,” which is a nice label the town puts on the fact that weird, unnatural things happen quite frequently in Haven. People have “powers/abilities” ranging from the inability to feel physical contact, the ability to make dreams/nightmares come true and harm/kill people, the ability to bring dead creatures back to life by stuffing them, etc. It sounds ridiculous but honestly every episode pulls it off quite nicely. It is kind of X-Files-esque except for the fact that this has nothing to do with aliens and everything to do with just weird shit. 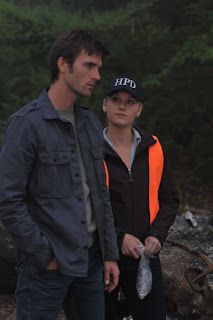 So, why do I like this show and why should you check it out? First of all, I love Emily Rose on the show. She’s an awesome lead and completely adorable. Plus, I love the fact that she is not your stereotypical “sexy because she doesn’t wear anything” FBI agent. She’s gorgeous, don’t get me wrong, but she looks gorgeous in a realistic down-to-earth way. She doesn’t wear overly sexualized, low-cut clothes and she can kick ass while fully clothed. This is not to say that those other types of FBI/CIA/whatever agents aren’t fun to watch. I just love her in the way that I love Olivia Dunham in Fringe. They’re beautiful without having to draw attention to their beauty. Another thing I love about the show is that there is a love-triangle (of course) between Audrey and the two male leads (Duke played by Eric Balfour and Nathan played by Lucas Bryant). And while both men are handsome and sexy and fun to watch, the love triangle is definitely not the focus of the show. Similar to Eureka, there are love stories and there is romantic drama but it is thrown in here and there without it ever being the focus or the “reason to watch.” The focus is the mystery and sci-fi elements of each episode.

Finally? The number one reason I love the show? The science fiction of course! I mean, it is difficult to come up with entirely new sci-fi mysteries and most ideas have been done at this point. But you have to admire a show that takes a possible werewolf storyline and adds a little twist. Every mystery they do is somewhat of a twist on previous sci-fi stories and unique enough that it makes it super fun to watch. And the show doesn’t take itself too seriously, which is another thing I love about Syfy shows in general.

I will end this review with this, I am a bad nerd in that I have not read a lot of Stephen King. I love The Shining and other Stephen King movies, but I just have never gotten around to reading his books/short stories. I bought my first one a few months ago and am fully psyched about reading it. This admission means that I’m not that familiar with the characters/mysteries that he has written about with the exception of the bigger named stories that have become movies. If a lot of these ideas have been done before, I wouldn’t know :). Regardless, King IS a co-writer on this show so if you are a fan of his, he has clearly given his blessing. I say everyone should go check it out. If you don’t love it right away, I completely understand. It took me about 3-4 episodes in before I started really enjoying the show and having that feeling of “I NEED to see the next episode NOW.” Give it a chance at least. It airs with Eureka so it has that going for it (Fridays at 10pm)!